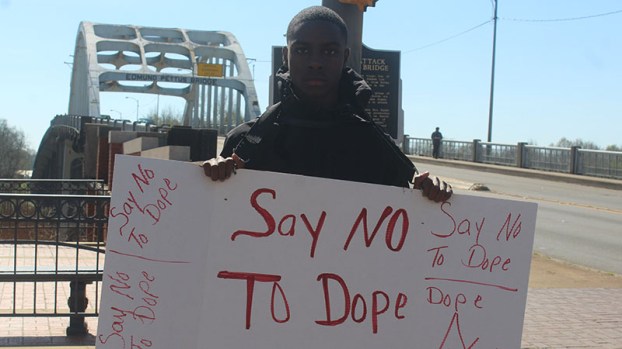 On the corner of Broad Street and Water Avenue, at the foot of the Edmund Pettus Bridge, Southside High School freshman David Hall stood with a sign strapped over his shoulders Thursday morning encouraging passersby to avoid drugs.

Hall stood on the corner for several hours and will likely be out there for next few days.

Hall was suspended from school for smoking marijuana and Thursday morning his mother took him to speak with officers at the Selma Police Department (SPD) about the dangers of drug use.

SPD Det. Matt Till met with the young man and his mother and talked about the tragedies that can follow a person who gets involved with drugs, noting specifically that violence is often a byproduct.

His mother advocated for him to don the anti-drug sign on the corner for the full five days of his suspension – though Hall was hesitant, he eventually agreed.

“He realized that holding the sign was better than it could have been,” Till said. “It’s very important to have an involved parent.”

“Now that I look at it, I feel like I shouldn’t have done it,” Hall said.

The freshman talked about he had told Till about his ambitions to play basketball in college and how that would not be a possibility if he was using drugs and unable to pass the drug tests required of college athletes.

Further, Hall noted that he has younger siblings.

“I know I was a bad influence on them,” Hall said.

The young man said that he hopes passersby will read his sign and be inspired to avoid drug use, particularly residents of Selma where crime is rampant.

A Keith High School student has been charged with murder. Quashawn Stallworth, 17, was arrested Thursday by the Dallas County... read more