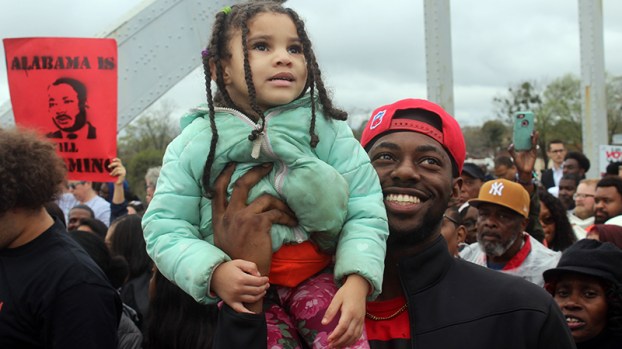 Despite gray clouds overhead and the looming threat of tornadoes, thousands gathered on Broad Street Sunday to march across the Edmund Pettus Bridge to recreate the events of “Bloody Sunday.”

On March 7, 1965, hundreds of peaceful activists were beaten and gassed by state troopers and racist citizens when they attempted to cross over the Edmund Pettus Bridge in pursuit of the right to vote.

The annual reenactment is the culmination of the days-long Bridge Crossing Jubilee and this year’s event attracted a slew of Democratic Party heavies, such as presidential candidates Sen. Cory Booker, D-NJ, and Sen. Sherrod Brown, D-OH, as well as former Secretary of State Hillary Clinton and civil rights icon Rev. Jesse Jackson.

Scores of people began gathering at the foot of the bridge shortly after 2 p.m. and organizers began shouting marching orders through a bullhorn, which would also be used by Clinton to deliver a few remarks before the contingent embarked on its march. 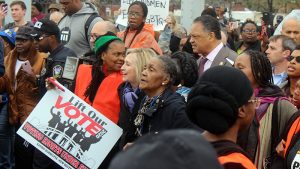 As the mass of people departed from Broad Street, a smaller contingent made its way up the bridge from Hwy. 80, chanting and singing as they marched.

“No justice,” the leader shouted.

“No peace,” the crowd responded.

“No racist,” the leader called again.

The groups met atop the bridge and, shortly thereafter, laid down for 400 seconds to recognize the 400 years that have passed since black people were first brought to this country in bondage.

Afterwards, thousands swarmed the bridge and marched from one side to the other, singing and holding up signs and raising fists as they traveled the same path that many traveled more than five decades before.

The Freedom Flame Awards was hosted Saturday night to honor icons of the Civil Rights Movement, both locally and across... read more