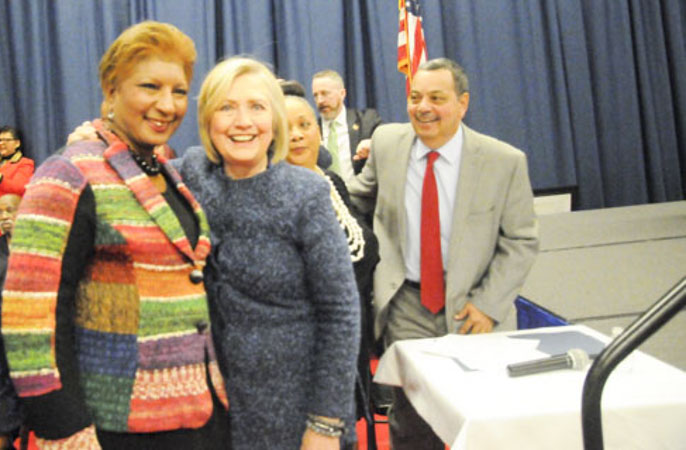 Clinton received the 2019 International Unity Award and was inducted into the Women’s Hall of Fame by former Senator Hank Sanders and his wife, Rose Sanders.

“Women have a hard time when they seek position of power and fight for women’s rights,” Hank Sanders said. “She had to fight to become a Senator and fight to become Secretary of State. If not for the FBI and the Russians, she’d President right now.”

The capacity crowd in WCCS Gymnasium gave a thunderous standing ovation for Clinton, a former U.S. Presidential candidate in the Democrat party. The former First Lady connected the two honors.

“The two honors go hand in hand,” Clinton said. “The fight for Civil Rights, Women’s Rights and human Rights have been the driving force of my career. I’m humbled and honored to receive the award.”

Clinton didn’t announce her candidacy for President and spoke about the race.

“I am not the only woman running for President, we have enough women running to start a basketball team,” Clinton said.

“After 54 years since the Voting Rights Act of 1965, we’re still fighting for the right to vote,” Sanders said.

“We’re facing a moral obligation in Selma,” Booker said. “Too many people are dying of gun violence. I’m proud to be here and honor our history.”

“It’s important to give back to Selma,” Sewell said. “We need your help, but we can’t do it by ourselves.”

Sen. Malika Sanders-Fortier, Sanders’ daughter, said in her remarks that it’s not about having power, it’s about sharing power.”

“I wouldn’t be standing here as the first black probate judge in Dallas County if not for Dr. King and the Foot soldiers,” Nunn said. “When you cross the Edmund Pettus bridge, remember those who sacrificed their lives. “