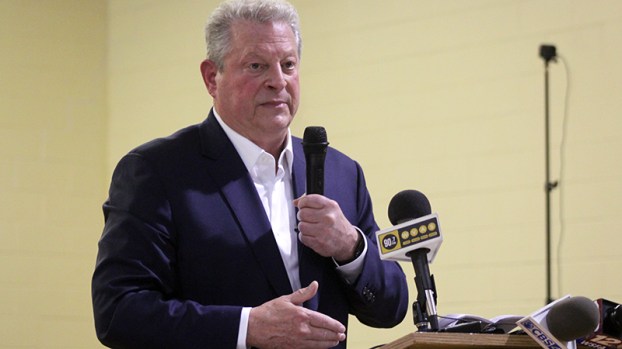 Jackson Steele Community Center was full Thursday morning in preparation of an appearance from former Vice President Al Gore, whose “Moral Call for Ecological Justice” tour is traveling across the nation and demanding action on climate change.

Gore is travelling alongside Rev. Dr. William Barber II, Co-Chair of the Poor People’s Campaign, who kicked off the event by illustrating the connection between “ecological devastation,” poverty and racism.

“We needed to be here in Alabama today,” Barber said. “These people that are poisoning our climate, I wonder if they love our children. We know what the real national emergency is. Too often, we have elected officials who vote more to benefit corporations than they do to benefit poor people.”

Barber noted that, in Alabama, roughly 400,000 people are living without health insurance and 36 percent of the population is at risk of not having access to clean water; more than 770,000 people are on food stamps and 103,000 veterans are making less than $35,000 annually.

“These figures represent the true national emergency,” Barber said. “For a mere small investment, all of that could change. The last time we checked, we don’t have but one planet to live on. Don’t let it be written on our epitaph, on our tombstone, that we had all the tools to fight but chose not to. Let it be said, when we’re long dead and gone, that we fought.”

Several people shared their experiences with the crowd, including Otis Petty, whose wife had to speak on his behalf due to the weakness of his voice.

Petty is suffering from cancer caused by the 15 toxic chemicals found in coal ash, among which he has been forced to live, and note that his area of the state is referred to as “The Cancer Belt” because four in five households have been affected by the disease.

A citizen from the Birmingham area spoke of pollution being leaked into the Tennessee River and how he received a letter from the Environmental Protection Agency (EPA) detailing the results of a soil test on his property – arsenic, cadmium, lead, mercury and a slew of other dangerous chemicals were uncovered.

Another woman, a resident of Lowndes County, discussed the conditions she is forced to live in – a mobile home plagued with mold, causing her daughter to suffer from continuing illnesses, and a straight-piping system for waste water.

“Somebody’s hurting our people and it’s gone on far too long and we won’t be silent anymore,” was the cry from the audience after each person’s testimony.

Gore took the floor shortly thereafter and applauded those in attendance.

“This is what change in America looks like,” Gore said. “It’s not about partisanship and it’s certainly not about race.”

Gore blasted a system he says has allowed corporations to dictate environmental policies at the expense of the people and a corrupt political body that has allowed it to happen, saying that coal ash ponds and smokestacks are situated in poor communities because those in power don’t care.

“A lot of what goes on to cause environmental injustice is legal,” Gore said. “But even if it’s legal, it still violates the conscience. They should be held accountable at the ballot box.”

But this, Gore said, leads to another concern, which is the rollback of voting rights.

“We have got to change this pattern,” Gore said.

The former vice president also voiced his disdain for Alabama’s solar tax, which he said was recently raised, as a benefit to power companies at the expense of the environment and the people.

“The sun shines a lot in Alabama,” Gore said. “This is prime territory for a solar energy revolution. This too can be remedied. [We have to say] ‘Alabama is a new state.’ There is going to be a call for ecological justice, for racial justice.”

Gore called on those in attendance to take action.

“There are people who look at all of these problems and feel a weight on their heart,” Gore said. “There is hope because we have the ability to determine our own destiny. Political will is itself a renewable resource.”

The Alzheimer’s Outreach Group (AOG), LLC and Thrift Store are teaming up to raise money. The AOG donated a $2,000 check... read more