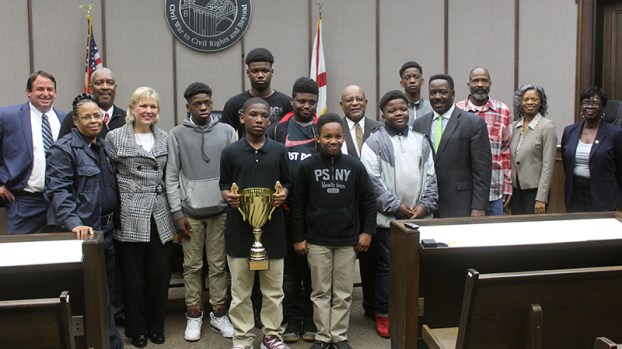 Among the items greenlighted by the Selma City Council on Tuesday was an ordinance for the 5-cent gas tax increase recommended by Selma Mayor Darrio Melton.

Council members voted to approve a first read of an ordinance for the 5-cent gas tax increase, which would generate around $1.8 million annually to be used to pay off a $25 million bond for infrastructure repairs, according to Councilman John Leashore.

Additionally, the council voted to give an ordinance for a 3-cent gas tax increase, which would be implemented if the bond is not approved, a first read.

Councilman Carl Bowline abstained on both votes with the rest of the council voting in favor. Council members Sam Randolph and Miah Jackson were not at the meeting.

As part of its consent agenda, the council approved a legal services proposal for Gamble, Calame and Jones to be retained for the City Council and the mayor and approved a request from John Harris, Jr. that his wrecker service be added to the 911 dispatch rotation.

The council also approved a film permit for Fork Films to do a documentary film during the weekend of Jubilee and a resolution awarding the Alabama Tombigbee Regional Commission a $36,500 contract for drainage projects.

Additionally, the council approved the establishment of an Art District on the west side of Water Avenue and an extension of the area of development to the Riverfront from Beech Creek to City Marina.

Later in the meeting, the council also approved a first reading of two liquor license requests for the same location, Lions Pride Wine and Spirits on Citizens Parkway, one for a lounge permit and another for a retail beer and table wine off-premises permit.

The items that were approved for a first reading will be brought to a vote at the council’s next meeting, scheduled for Feb. 26 at 5 p.m. at City Hall.

Selma Housing Authority Executive Director Kennard Randolph addressed the council to celebrate the achievement of his recently-established basketball team, which won an area tournament after only two weeks of practice.

Council members took turns celebrating the team’s accomplishment, alternately commending them for using their time in a positive way and encouraging them to stay focused on their ambitions.

Councilwoman Angela Benjamin informed the council and those in attendance of a slate of events she has scheduled in the coming weeks – the Quarterly Ward 4 meeting will be held Feb. 20 at 5:30 p.m., with the location to be announced in the coming days; the 11th Annual Black History Month Celebration will be held Feb. 25 at 5:30 p.m. at the Performing Arts Center; and the 10th Annual Black Man Heal Symposium will start at 9:15 a.m. the following day in the same location.

Stephanie Jackson, who works with cheerleaders in the Selma Rebels football league, also addressed the council on the team’s needs, which stem from a lack of funding and outdated equipment.

Jackson presented each member with a binder full of information, including sponsorship packages to provide the 200 players in the league with new shoulder pads, helmets and jerseys, as well as uniforms for the cheer squad.

Jackson noted that young people involved in extracurricular activities are less likely to become involved in illegal activity and council members were enthusiastic about finding ways to support the league.

During committee reports, Bowline assured Tom Headley, who addressed the council during Monday’s work session on the need to revise the city’s request for information form, that the Administrative Committee would be meeting soon to take up the issue.

Leashore detailed the Public Works Committee meeting, from which the motion to approve the first read of the two gas tax ordinances came.