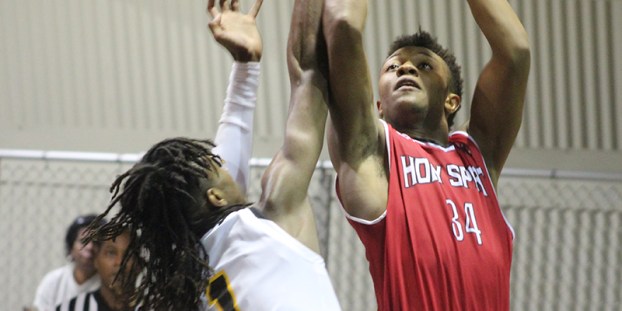 The Ellwood Christian Academy Eagles are still in the running for their first AHSAA 1A Basketball title after they defeated Holy Spirit on Tuesday night with a final score of 72-54.

The sub-regional game against 1A Area 7 runner-up Holy Spirit was all that stood between Ellwood going to AHSAA regionals in Montgomery for the third year in a row.

At the end of the third quarter, the Eagles trailed with 44-43.

The Eagles finally pushed forward in the fourth ending at 72-54.

Ellwood’s coach Willie Shears said this win was one of the many goals the team had set for themselves.

“It feels good,” said Shears. “It was one of our goals. Our first goal was to win every conference game so we could host at home to get the home advantage. As you can see we had our crowd here tonight. Our second goal was to win our area tournament and we won that.

“Our third goal was to make it to Montgomery and we have done that. Now, it is back to the drawing board. We get to go to Montgomery, but that is just one step. The biggest goal is to get to Birmingham. We are going to get some rest and find out who we have to play and get back to it.”

Shears also talked about the third chance the team now has at regionals.

“Last year when we lost at Montgomery, we lost by five in overtime,” said Shears. “We are going to keep doing what we are doing and try to perfect closing games.”
Shears also commended Holy Spirit on their game play Tuesday night.

“My hat goes off to Holy Spirit,” said Shears. “They are knock-down shooters, they have a great coaching staff. They stuck to the script, but our guys had a determination. They didn’t want the season to end tonight. I told them yesterday that this could be their last practice.”

Selma High couldn’t recover from a disastrous first quarter in its Class 6A Sub-Regional contest against Hillcrest-Tuscaloosa. The Patriots scored... read more