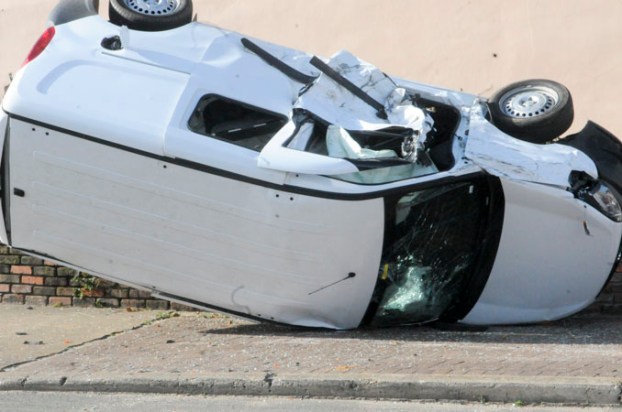 A two-vehicle accident temporarily shut down traffic near the front of the Edmund Pettus Bridge Friday morning around 8:45 a.m.

The accident happened on the Intersection of Water Avenue and Broad Street, according to Selma Police Department and Traffic Commander Lt. Reginald Fitts.

The SPD, Selma Fire Department and Care Ambulance responded to the accident.

The vehicles involved in the accident were a white four-door Chevrolet Colorado with Dallas County license plate and a white Dodge van with a North Carolina license plate. Fitts said the drivers of the vehicles were young white males. He didn’t reveal their identities.

Fitts said one vehicle was traveling west on Water Avenue and the van was traveling south on Broad Street, then they collided at the intersection. The van was turned upside down on the sidewalk of The Selma Times-Journal.

Fitts also said the driver of the van was taken to Vaughan Regional Medical Center for treatment.

Both vehicles were taken away by wreckers and traffic resumed 45 minutes later.

The SPD is investigating the accident.

The Annual Bridge Crossing Jubilee is scheduled for March 1 through 4 and will feature more than 40 events, half... read more