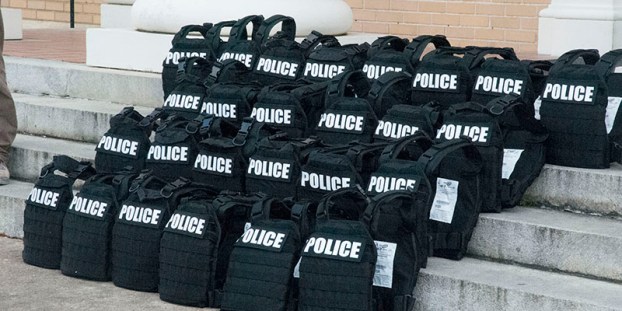 This comes after a fundraiser 5K race, The Cemetery Run, held last year in October by Rex Jones of Cougar Oil and others.

“Today we received our rifle proof vests for the police department, and we should be receiving the turnout gear for the fire department for the next few weeks,” he said. “They came and fitted each fireman for a suit, and it usually takes around 90 days to make a suit. The vendor came and fitted them right after the run around the beginning of November. Within the next couple of weeks, they should have them.”

Jones said the fundraiser raised money and donated 22 of those 28 vests.

“Each vest was roughly about $750,” said Jones. “We spent a little bit over $16,000 on all of them. They are rifle proof rated. There are ceramic plates in each vest, and they are rated for more than your average bullet proof vest. We saw a need in the community. We feel like these first responders put their life on the line everyday, and the least we could do is try to do something to make their lives a little bit safer. We have a lot of sponsors that donated money. It was a group effort, and the town came together. We had an overwhelming response from businesses and individuals from around town who wanted to give money and help.”

SPD Chief Spencer Collier said he was appreciative of the donation.

“Most importantly it is going to give us the ability to provide the equipment to protect our officers,” said Collier. “What we called rifle rated vests are rated as a high as a 7.62, which is a very high powered rifle, but unfortunately we see a lot of that in Selma. Just as importantly, the word of them coming in is already improving morale. That goes a long way the fact that the officer knows that he has the proper equipment to do his job has a tremendous effect on morale. We are so appreciative of the community who put their time, effort and their own money into raising the money for this. It was humbling for us.

“I know the overwhelming majority of this community supports this department,” said Collier. “This demonstrates that. Unfortunately, we saw what happened to Officer Hale, but the community responded.”

SPD Officer Micah Hale was shot and suffered injuries in an ambush shooting on Sunday, Sept. 23, 2018.

Also in September 2018, two officers were shot at in the George Washington Carver Homes (GWC) where a suspect shot an alleged six to eight shots at a squad car. Neither officer was injured during that incident.

Hale’s first day back at work was Tuesday as well.

Hale compared it to the first day back at school for a student.

“The first day is kind of like a kid’s first day back at school,” said Hale. “I laid the uniform out, and I was nervous at the same time, but once I finally got to rolling again, and it is second nature to me. It is like coming back home again. Luck would just happen to have it, I come back on the same day these vests are delivered.”

Hale talked about the September shooting and how these donated vests would’ve helped the situation.

“It would have made a vast difference,” he said. “I never would have been injured, I would have trauma but not actual penetration. We appreciate that we have these now because it has been long overdue. We are appreciative to the community for all of their outpouring because they are much needed.”

Students get a hands-on lesson in math, science

On Tuesday, students in the Edmundite Missions’ after-school program met at the future site of the local group’s community center... read more