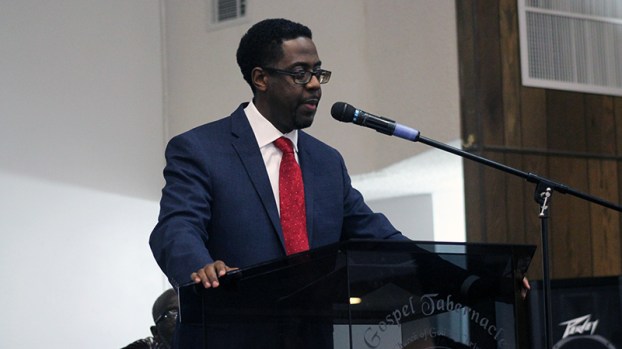 On Tuesday, the Selma-Dallas County Emancipation Proclamation Committee recognized the 156th anniversary of the signing of the landmark document which freed all slaves in the Confederate states.

The event was held at Gospel Tabernacle Church of Christ in God.

After a brief welcome from committee President Charles Johnson, those in attendance joined their voices to sing “Lift Every Voice and Sing.”

Gospel Tabernacle Pastor John Grayson led a brief prayer and scripture reading, the choir sang and Johnson reminded everyone of the importance of the day and the mission of the committee.

“We want to ensure that our young people can be proud of their heritage,” Johnson said.

Students from area high schools read the text of the Emancipation Proclamation, which took effect on Jan. 1, 1863 and Rev. Joe James Peterson of El Bethel Baptist Church reflected on earlier committee leaders, calling them “visionaries,” and also discussed the importance of the group.

“I speak with the voice of freedom,” Peterson said. “You’re not free until you believe you are free.”

Johnson followed him up by recognizing Probate Judge-elect Jimmy Nunn, who thanked those in attendance for supporting him throughout the years.

More songs were sung and an offering taken up to bolster the committees funds, used for funding scholarships for Selma students, before Alabama Rep. Prince Chestnut (D-Selma) was introduced and began speaking.

A common theme throughout the day was the necessity of educating young people to their history and Chestnut elaborated on this topic.

He noted that many children believe that black people’s history began in bondage and they don’t recognize the rich heritage that came before in places like Ethiopia and elsewhere.

“These are things we must tell our children,” Chestnut said. “It’s important that we know we didn’t start out in American slavery.”

Chestnut reflected on that part of American history, calling slavery an evil institution and describing the ways in which slave owners used rationalizations to justify their cruel treatment of other people.

“Our ancestors sacrificed so we could be here today,” Chestnut said.

He then discussed the importance of the Emancipation Proclamation but noted that the modern prison-industrial complex leaves a lot of that dream still unrealized.

“The proclamation implicitly applied the Declaration of Independence to all people,” Chestnut said. “However, the 13th Amendment does not eliminate all forms of slavery.”

The Alabama Senate Democrats recently elected a new slate of membership to lead their party for the upcoming 2019-2022 quadrennium.... read more