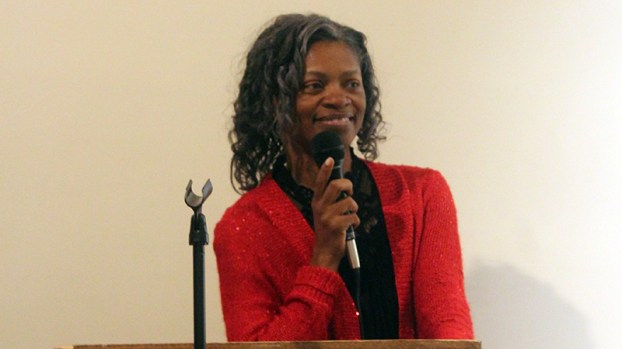 The event is held at the end of every year to inform the ward’s constituents of how their concerns are being addressed within city government and more so to celebrate the contributions residents are making to improve the area.

The celebratory event began with attendees mingling and enjoying food and beverages provided by a wide array of residents.

The Mount Zion Primitive Baptist Church Praise Team, led by Aurelia Craig, performed a couple of numbers and cheerleaders from Cedar Park Elementary School launched into a couple of routines.

Ward 4 resident Jacob Marshall performed and Brenda Obomanu, the ward’s representative on the Selma Board of Education, spoke briefly on the changes in store for the ward as Selma City Schools edges close to closing Cedar Park, the only public school in the ward.

“This is a hard decision we’re having to make,” Obomanu said. “Selma is suffering right now.”

Benjamin assured those in attendance that the school building would not stand vacant.

“We don’t just intend to let it sit there,” Benjamin said.

Benjamin thanked those who helped in pulling the annual event together and thanked Block Captains in her ward, those who keep an eye on their streets and work to maintain the area’s cleanliness.

“You all are precious to me,” Benjamin said to the residents of her ward. “If no one comes to the rescues, we will do it ourselves. We shall continue to rise.”

Benjamin briefly discussed plans to install a “play place for children” and an ongoing ditch project in the area. Further, she mentioned her continued work to bring a farmer’s market to the area, an effort that’s being hindered by the Environmental Protection Agency (EPA) as the planned site is where a gas station was once located.

During a press conference at the foot of the Edmund Pettus Bridge Friday, Sen. Malika Sanders-Fortier (D-Selma) called for the... read more