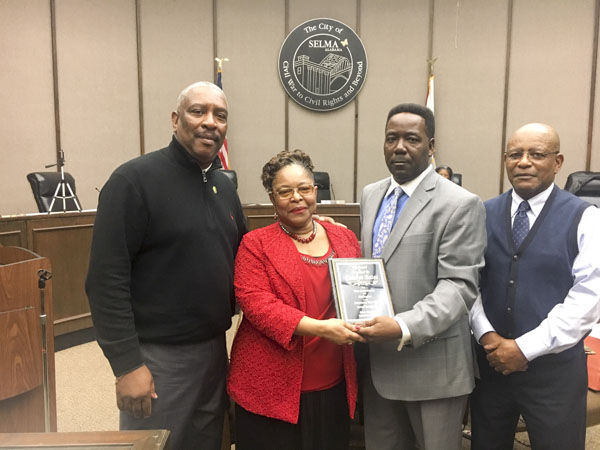 The Selma City Council honored longtime Dallas County educator and county board school member Carolyn Bates with a plaque at its city council meeting on Tuesday.

Several council members showered Bates with praise at the last council meeting of the year.

Council President Corey Bowie called Bates a “champion for the underdog.” Bowie and councilmen Michael Johnson and John Leashore presented her with a plaque.

Johnson said Bates was a tireless worker for education in the area.

“Thank you for the years of service you put in with the kids,” Johnson said. “I hate to see you retire.”

“Thank you for championing the rights of children with special disabilities,” Youngblood said.

Bates said she was honored by the recognition.

“I’d like to thank the city council and citizens of Dallas County,” Bates said.

Bates said her next step is completing the two special needs projects: Science, Technology, Engineering and Math (STEM) and the children’s museum.

Council members discussed the city’s plans to continue with expansion of the Riverwalk Park and seek the citizens’ support the project.

Funds were allocated from the Alabama Department of Transportation (ALDOT) two years ago for the next stage of development (Phase 1), which includes an overlook at the end of Washington Street in front of the Bridgetender’s House and stair way from the St. James Terrace to connect to existing walking trail. Funding is secure for Phase I. Funding is being provided by the Federal Highway Administration.

Citizens with feedback on the Riverwalk should fill in a comment sheet and return to the Development Office, Henry Thompson, by the close of business day, 4 p.m. or scan and send to hthompson33@gmail.com.

Christmas parade on for Saturday

The Selma Christmas Parade, which was rescheduled due to earlier inclement weather, will take place this Saturday at 10am. This... read more