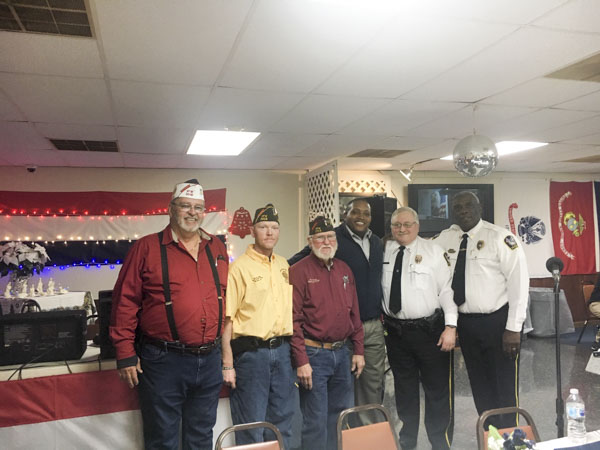 The Veterans of Foreign Wars (VFW) Post 3016 recognized the first responders in Dallas County at its annual banquet on Sunday.

Selma Police Department Lt. Micah Hale and Dallas County Sherriff Harris Huffman Jr. were both named officers of the year in their respective departments. They received checks and certificates by the VFW.

“I got the same award in 1984, I appreciate my peers,” Huffman said. “Law enforcement isn’t just a job, it’s an opportunity to do things right.”

Hale, who was wounded but survived the ambush-style shooting on Sept. 23, thanked the VFW, DSCO and SPD for their support. Hale plans on returning to work next month.

“It’s been a difficult time for me and my family,” Hale said. “My brothers in the SPD and DCSO both circled the wagon. The support has been outstanding. I appreciate the VFW. I’m a proud son of Selma. My family and I don’t plan on going anywhere soon.”

Here are the other first responder award winners: Jacob Elliott of Care Ambulance was named Outstanding Medical Care Giver of the year and Lt. Daniel Fulford of the Selma Fire Department (SFD) as Outstanding Fire Fighter of the year.

The Selma Times-Journal, KIX Country 101.5 FM and WDXX 100.1 FM all received media awards for their outstanding coverage in the community.