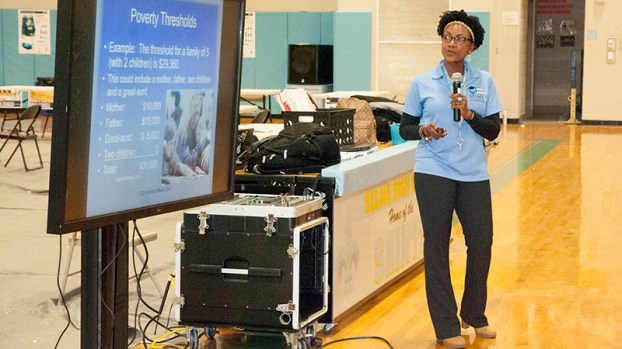 According to the United States Census Bureau, nearly 40 percent of Selma residents are living at or below the national poverty line.

Selma City Schools attempted to give community members an intimate look at what that reality looks like by hosting the Community Action Poverty Simulation on Wednesday at Selma High School.

According to Selma City Schools Superintendent Dr. Avis Williams, approximately 65 people participated in the event and another 20 served as volunteers – participants were tasked with surviving on the budget, and within the realities, of a poverty-stricken family while volunteers served as the agencies with which they would have to interact, such as banks, schools, child care facilities and so forth.

Along with school staff, Williams said local pastors, Department of Human Resources counselors and other local leaders were in attendance.

“We have a very high poverty community,” Williams said. “The purpose of participating is to create a level of understanding so we’re not so quick to judge the families we serve. I think it absolutely served that purpose.”

Williams said the event was aimed at instilling empathy for the very real conditions that some people face.

“Too often we look at things through our own lens and our expectation is that people will react the way we do, not realizing we have families whose situations may be quite different from ours,” Williams said.

Before having participants break into groups, which served as families for the experiment, Williams gave a presentation on the effects on poverty on students.

According to her presentation, poverty can stifle brain development, negatively impact physical health and school achievement.

Williams noted that these outcomes are the results of poor nutrition and stressors within the home and the community.

Further, Williams added, families dealing with poverty can afford to expose their children to the types of social and cultural opportunities that wealthier families can afford, which also negatively impacts their education and development.

“The vast majority of our students are in families that are grappling with these situations,” Williams said, estimating that about 85 percent of students in Selma City Schools are living in poverty. “Any time we’re working with children in homes lacking resources, there’s a number of stressors.”

Williams believes that the Poverty Simulation had a real impact on the way people view the conditions that many are facing in Selma and across Dallas County, noting that many participants struggled to stay afloat during the experiment and some had to collaborate with other groups in order to get by.

“It’s really enlightening to get a snapshot of the challenges our families face when their incomes are limited,” Williams said. “We’ve got to recognize that the challenges they’re facing are not their fault. As educators, we have a responsibility to ensure that we’re providing the highest quality education for all of our children.”

Selma City Schools will be hosting two more poverty simulations in January and February – the number of available spaces for participation will be announced in the coming weeks.

If you are interested in volunteering, contact Courtney Washington, Community Engagement Specialist for Selma City Schools, at courtney.washington@selmacityschools.org.

Shirley Killett silently walked through the doors of Lawrence Brown-Service Funeral Home Thursday a little before noon. She was greeted... read more