Dobbs finds his own personal heaven in knife craftsmanship 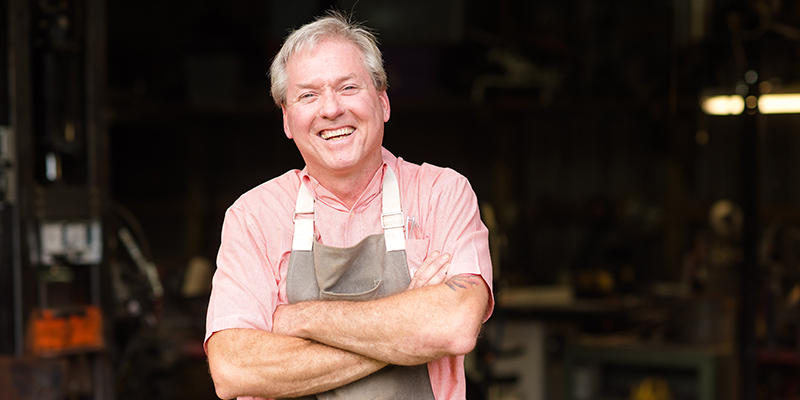 Matt Dobbs’ workshop sits at the top of a hill underneath the shade of a few trees a short walk away from his home at the end of long, winding gravel driveway.

Inside the shed, his own personal heaven filled with hundreds of tools, hand-made equipment serves as the main office for Dobbs Custom Knives.

The business that grew from a lifelong passion for craftsmanship produces a variety one-of-a-kind knives built by hand.

“Dobbs Custom Knives was formed just out of a hobby,” he said. “An interest that I’ve had in knives, craftsmanship and creating and making things. I’ve done that all my life, and I sparked some interest around October, November last year.”

A task to step away from his job as the executive vice president of Selma Oil Mill and mayor of Valley Grande caught the attention of people interested in getting their hands on Dobbs’ work.

As the demand for his work grew, Dobbs decided to make the most of his talents and start his own business.

“It officially started in the spring of this year,” Dobbs said. “It’s still in its early stages, of course. At this point, it’s still a part-time business. The idea is to grow it into something I do full time.”

Each knife that Dobbs makes is unique for several reasons.

Not only do his customers have input into the size and style of the knife they ordered, but Dobbs’ only restriction in his workshop is his imagination.

Nothing in is shop is automated. Everything from selecting the steel to measuring the cuts, heat treating the metal in his homemade forge and sharpening the blade is done with Dobbs’ own two hands.

“One of the reasons I called my business Dobbs Custom Knives instead of Dobbs Hand-made Knives, is because I want the customer to have a say in how their knife is made. The color of the handles. The size of the knife. The color of the blade. Whether or not they want the pocket clip and if they want it fit for their right or left pocket,” he said. “Every knife is a bit different and all of the blades and handles are fitted together from start to finish. They’re all drilled at the same specifications, but since every knife is hand-made there is no automation in the process. Everything is shaped by hand, grinded by hand, heat treated by hand, polished by hand and I would say that each knife is very unique and really one-of-a-kind.”

He has no instructions posted on the walls. There aren’t any templates or presets to guide him. Dobbs works station to station, and completes a task at a time until the knife is completed to his satisfaction.

“It really gets the creative part of my brain going,” Dobbs said. “My daytime job doesn’t really do that. I’ve always enjoyed working with my hands, so it helps with the creativity. It makes me feel accomplished. This is not something everybody can do … The creativity is in figuring the process out. There’s not really any blueprints for any of these knives.”

The free-hand method ensures that no two pieces are the same.

“I want to make usable utensils for people,” he said. “A lot of people in the knife-making world just sort of make keepsakes or weapon-type knives. But I’m interested in making something that is functional and useable on a day-to-day basis for people.”

Dobbs’ specialty is the friction folder knife. It’s a handheld knife that allows the blade to fold into the handle. At the end of the blade is the tang. A tail like extension of the blade that works as a safety measure to prevent the blade from bending during use.

The friction folders are his most popular products, and the blacked-out version is a customer favorite.

Dobbs also enjoys the knives he creates with the Damascus steel.

Damascus steel is a combination of two different steels that Dobbs has to forge together himself before shaping the blade. Once finished, the 84 layers create a random pattern on the blade that can’t be scripted, traced or replicated.

“The unique thing about making Damascus is that as you’re forge-welding the two steels together, you never know what design is going to come out,” Dobbs said. “I also experiment with different finishes on the blade.”

Dobbs looks at peace surrounded by his tools and equipment. His hands are steady when he grinds the blade against the speeding belts. His grip is tight when he holds the steel to the flame.

“Somebody told me years ago, you find what it is you love to do and then figure out how to make a living at it,” Dobbs said. “That’s what the knife business has become.”