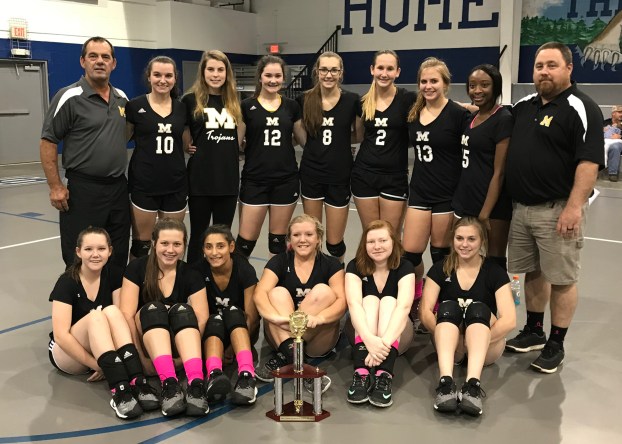 Chambers Academy eliminated the Lady Trojans from AISA Elite 8 Volleyball Tournament at the Cramton Bowl in Montgomery. MCS lost the first two sets 25-22 and 25-17 before winning the third set 25-21 and falling in the fourth set 25-19.

MCS finished the season with a 16-3 record, but the Lady Trojans won all 10 of their games in Class 1A, Region 2. They also wound up tied for fifth place.

“The season didn’t end the way I hoped,” MCS coach Tim Burton said. “The girls were nervous and it’s really hard to say why they were nervous. The girls have experience and had the desire, but they just overplayed things.”

The Lady Trojans finished second in their Regional tournament last week, falling to Southern Academy 25-11, 25-16 and 25-10 in the Region finals. By finishing second, MCS advanced to the Elite 8 round.

“We saw the teams that we have to beat and what it will take to beat those teams,” Burton said.

Until the end of last year, MCS competed in the Alabama Christian Athletic Association (ACAA) before moving into the AISA. Hagan said the experience will help MCS in the future.

“We had no idea what to expect,” Hagan said. “We had not played any of these teams in years.  I believe that we competed at top level and made a name for ourselves in the AISA.  We look forward to coming back next year and going further.”

All In Sports Outreach held its fourth annual baseball camp on Saturday. The camp was for kids ages 7-12. “It... read more