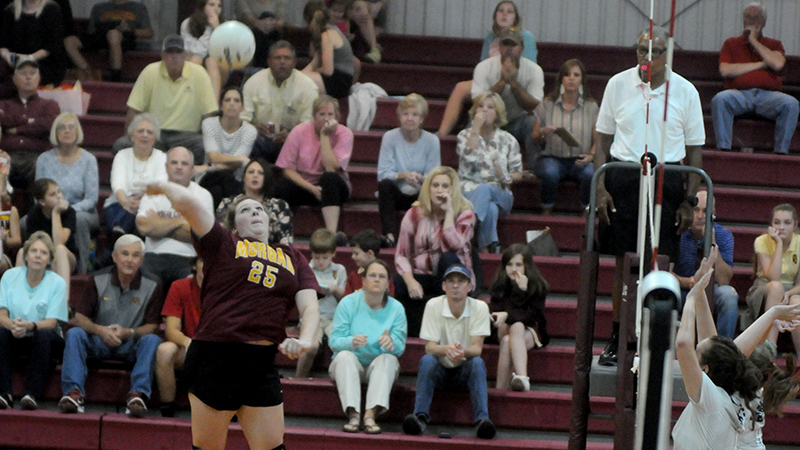 The season was on the line.

A spot in the AISA state playoffs were at stake.

The Morgan Academy Lady Senators (MA) played their hearts out, but the team fell just short in four close sets to the Tuscaloosa Academy Knights (TA) on Tuesday afternoon.

Each set was decided by four points or less, as the teams battled for each point.

TA had a 19-16 lead in the first game when MA starter Laney Holladay had to leave the game with a injury to her right hand. Holladay wouldn’t return to the game, but Caroline Thomas stepped up when she was needed for her team.

The injury didn’t slow down the Lady Senators as the team went on a six-point run with Mary Vincent Lewis serving. Once both teams were tied at 20, they traded points back and forth until TA scored two-straight to set up game point. The Knights won the first game 25-21 on a block at the net.

The Lady Senators came out strong in the second game and opened with a seven-point run.

The intensity of the win-or-go-home match began to get to the fans more than it did the players on the court.

Two women in pink from the stands decided to replace the two volunteer male judges on the back line after the AISA referees corrected an in-call for TA. The men yielded their flags without a fight and the match continued without skipping a beat.

MA maintained the lead in the second set, but not without persistent resistance from TA. The Lady Senators had game point at 24-19, but the Lady Knights scored three more points before Tindall Albritton put the game away with a kill to the back, right corner of the court for a 25-22 win.

Albritton led the team with 9 kills and Kenley Kauffman had 8.

Aubrey Holladay had 5 aces, while Meredith Hand and Mary Vince Lewis each had 10 assists.

The girls from both teams were diving for digs and saving balls deep beyond the end line.

The third set had to go into extra points before TA finally won it 27-25.

“We wanted it. And when you want it, you’ll dive at anything,” Thacker said. “You’ll try to save any ball you can and they fought a good fight tonight.”

The fourth and final set was also a nail-biter that came down to the last few points. MA trailed 24-21, and the net prevented them from returning TA’s serve back over the net.

Service errors also hurt the Lady Senators chances at getting ahead of TA. MA had 17 team service errors compared to TA’s 4.

“TA served better than we served, and that’s where we messed up,” she said. “We couldn’t keep the serve once we had it.”

The loss prevented the Lady Senators from advancing into the playoffs and it ended their season. Their final record was 14-5, and they had the best region record in Region 2 Area 2.

“I’ve seen them play some amazing games where we’re on the other end of this type of game,” Thacker said. “It’s a hard loss because you’ve got one game that determines your whole season and it doesn’t reflect on the past 17 or 18 games. But that’s the nature of sports. They’ve done great this season.”