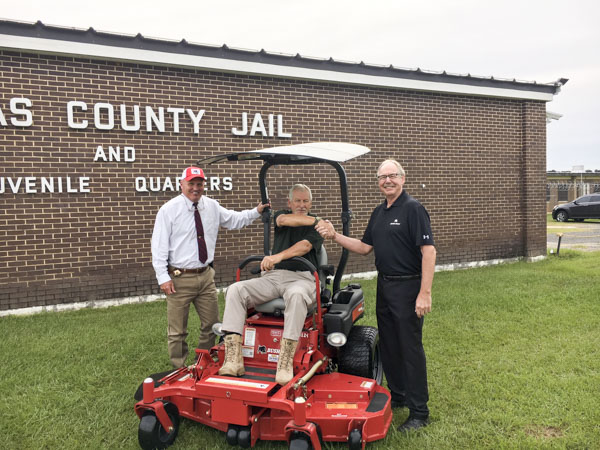 Bush Hog celebrates its 67th anniversary Friday and President Jerry Worthington said the company appreciates the DCSO. The new mower will be used at the Dallas County Jail.

“We’re not just a business, we’re part of the community,” Worthington said. “The jail didn’t have a good mower. We’re proud to give it to them. We appreciate the Dallas County Sherriff’s Office.”

Huffman, who retires at the end of the year, said the donation was needed and much appreciated.

“Bush Hog is a local industry and has been here for years,” Huffman said. “They graciously donated a mower. We have a lot of acres at the jail. The Dallas County Sherriff’s Office and the county jail are working on a tight budget. The mower will be well received and well used.”

Granthum, who officially takes office in January, said the new mower gives the DCSO a chance to focus on other needs.

“The mower was something we needed for a while,” Granthum said. “It helps us put money in other areas. For us to have this mower, it will allow us to cut back on time.”

Shelbra McDonald has spent the last 10 years as an educator. The Raymond, Mississippi native has spent six years as... read more