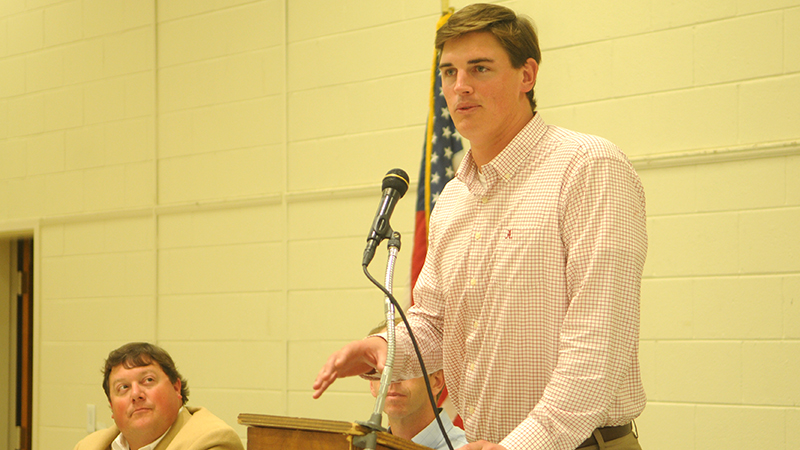 Former Crimson Tide national championship quarterback Jake Coker didn’t deliver much of a monologue on Monday night to the Selma QB Club, but he let the stories fly left and right when the question and answer segment opened up to the football fans who came to hear him speak.

“I had a blast,” Coker said. “Even some of those Auburn guys had some pretty good questions, so I had a good time. That’s my favorite thing to do, interact with the club and answer their questions.”

Coker, a native of Mobile, played his high school ball at St. Paul’s Episcopal School. After high school, he went to Florida State University and played under Jimbo Fisher.

After three seasons with the Seminoles, Coker transferred to Alabama.

In his first year with the Crimson Tide, Blake Sims was the starting quarterback and Coker had to wait one more year for his turn to lead the team.

When he finally won the starting job, Coker led the 2015-2016 Crimson Tide to a 14-1 record and a 45-40 win over the Clemson Tigers in the College Football Playoff National Championship game.

Coker later signed with the Arizona Cardinals, but retired from the game after another knee injury set him back again.

Throughout his collegiate playing career, Coker has competed with and against some of the most notable names in college football in recent years.

At Florida State, he shared a quarterback room with E.J. Manuel and Jameis Winston.

At Alabama, he shared the field with Calvin Ridley, Cam Robinson, Ryan Kelly, O.J. Howard, Derrick Henry, Reggie Ragland and many other teammates who made it to the NFL.

He’s been coached by Fisher, Nick Saban and Lane Kiffin, and each coach had an impact on his development as a quarterback.

The QB club members were eager to hear the comparison between FSU and Bama, and between Fisher and Saban.

While Coker enjoyed his time at FSU, he felt that the support system at Alabama was the main difference between the two programs.

As far as running the programs, Saban’s former assistant runs his ship in a similar fashion.

The difference between the coaches are more in their preferences than their leadership. Coker thinks of Fisher as the best coach for quarterbacks in the country. As far as game preparation and development, Coker spoke highly of his first college football coach.

Coker said Saban is the best coach in college football. Even though he’s more defensive-minded than Fisher, Saban has the ability to get everyone focused on the task at hand no matter how many players are future NFL draft picks.

He called Kiffin the best offensive engineer. He spoke of how Kiffin could setup the offense so that the defense would play into his hands for the big strike play.

“There is no boundary, in my opinion, to who you need to meet or who you need to be around,” Coker said. “It’s good to be coached by as many people as possible. It got me used to all different kinds of coaching styles, so I think it was a big benefit for me.”

The QB club members asked more questions of Coker than any other speaker this year, and he enjoyed engaging with all of them. They asked about his favorite Iron Bowl play, the National Championship against Clemson and of course what he thought about current Crimson Tide quarterback Tua Tagovailoa.

“I think Tua is going to be the best quarterback to come out of Alabama,” Coker said. “I think those receivers are as good as we’ve ever had. The O-line is young in some positions, but they do a hell of a job, and I think Tua helps keep pressure off of them by the way he gets the ball out. It’s one hell of a team, and it’s going to be hard for anybody to beat them.”

Coker was the last speaker for the month of October, and the club will pick back up with its final three meetings in November. Troy University athletic director Jeremy McClain will be the next speaker on Monday, Nov. 5 at the Carl C. Morgan Convention Center.