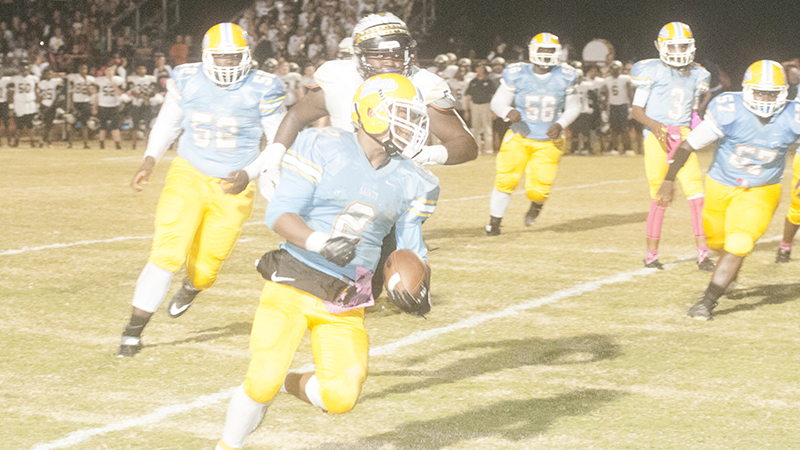 Selma High’s Amarian Molette gets to the edge against the Wetumpka Indians on Friday night.

The Selma High Saints lost against the Wetumpka Indians 61-40 on Friday night at Memorial Stadium.

It was a night with touchdowns in each quarter, starting early with the Indians scoring first with  Tyquan Rawls and Zachary Grindle kicking the extra point with 10:01 left in the first quarter making the score 7-0.

In the second quarter, the Indians made their next touchdown with 11:36 remaining on a pass from Rawls to Deangelo Jones.

Rawls added more to the Indians’ total score with a 40-yard run with 7:16 left in the first half to give the Indians a 28-0 lead.

The Saints’ first score came in the second quarter with 4:54 left when Gabriel Wade caught a touchdown pass.

The Indians answered with their own 90-yard return run by Terrance Thomas with 4:37 left in the first half to bring the score to 35-7.

Selma’s Nicholas Parnell made the score closer at 35-14 just 27 seconds later with his first touchdown of the game.

The Indians ended the second quarter with a successful field goal with 1:34 left. This made the score 38-14 at halftime.

Saints running back Amarian Molette scored on a 5-yard run making the score 38-20 with 9:22 left in the third.

Wetumpka’s Edward Rogers made the next score of the night with 6:04 left in the third quarter, which increased the Indians’ lead to 45-20.

Selma made a four-yard pass between Keondre Hope and Parnell to make the score 45-26 with 2:56 left in the third.

Wetumpka opened up the final quarter with a completed pass from Rawls to Edward Rogers with 11:51 left, and brought the score to 52-26.

The Saints returned with their own touchdown with a completed pass to Parnell, and Molette earning an extra two points from the Saints with only 5:44 left in the fourth quarter. The score now sat at 52-34.

Wetumpka kept scoring in the fourth with a field goal at the 3:39 mark, and a 90-yard run from Thomas with only 23 seconds left in the game.

Selma ended the game with a completed pass from Hope to Wade.

Raymond said he was proud of his quarterback.

“My quarterback is a true ninth-grader,” he said. “He played well and you have to play through the ups and downs, and I think he grew up tonight.”

Next week, the Saints take on Aliceville.

“They are doing pretty good,” Raymond said. “We won’t spend too much time worrying about other teams, but we will go back and watch film and correct the little things.”