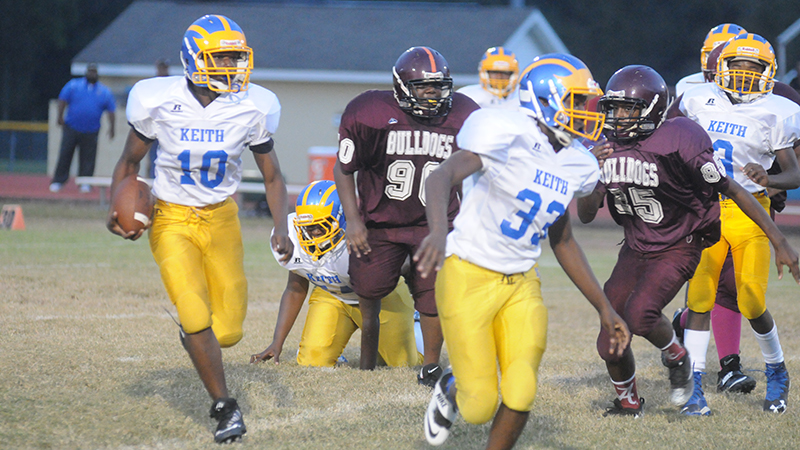 Keith Middle scored twice on the ground in a 12-0 win over R.B. Hudson Middle.

The R.B. Hudson Middle School Bulldogs football team had its homecoming game this past Tuesday at Memorial Stadium, but it was the Keith Middle Bears who was celebrating at the end of the game.

“We’re basically defensive minded,” Bears head coach Cecil Williams said. “That’s what we worked on a lot this year. The majority of our games were low-scoring, so I’m pretty proud of them for that.”

The Bears two rushing touchdowns gave them the 12-0 lead they needed to shutout the Bulldogs in a defensive ball game.

Keith scored the first touchdown of the game with 1:11 left in the first quarter.

The Bulldogs biggest offensive play was a pass to the right end over the middle that nearly went for a touchdown. But a Keith defender chased him down and forced a fumble to end the Bulldogs scoring threat.

Defense played big in the low-scoring matchup. In addition to the fumble recovery, both teams forced turnovers with interceptions as well.

Keith added an insurance score with a touchdown in the third quarter, and that was the final score of the game.

That was Keith’s final game of the season as they finished 4-1.

The Bulldogs (1-4) have one game remaining against Tipton during their homecoming game.