By: Thomas Scott and James Jones

More than 65 City of Selma employees left work on Monday afternoon having received an official layoff notice from the city’s human resources department.

“Due to lack of funds, it will be necessary for the City of Selma to reduce the number of its employees,” the notice signed by Sean VanDiver of the city’s Personnel Department said. “In accordance with the Personnel Rules and Regulations for the City of Selma, Rule 5.4, a layoff plan has been prepared and approved to accomplish this.”

The 15-day notice alerted the employees that the layoff goes into effect after the close of business on Monday, Nov. 5, 2018. 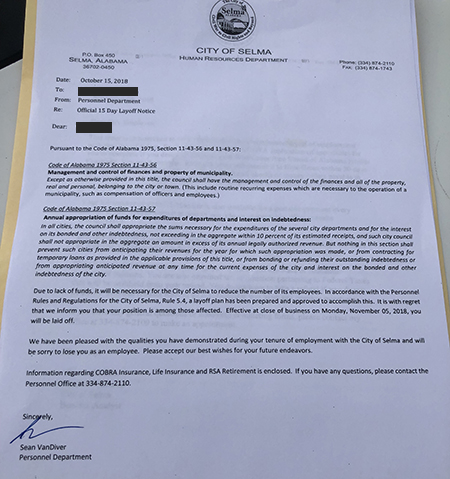 Selma Mayor Darrio Melton and chief of staff Saprina Simmons visited the city’s Parks and Recreation Department personally to meet with the staff, answer questions and deliver the notices to 11 employees.

The Parks and Recreation department was just one of the departments that was effected by the decrease in spending in the city’s budget.

In Mayor Melton’s proposed $22 million budget, he had $801,475 devoted to the parks and recreation department. The budget, which was rejected by the city council, had a $32,237 increase in salaries for the department.

Council President Corey Bowie stated that the council will call a meeting to discuss the layoffs.