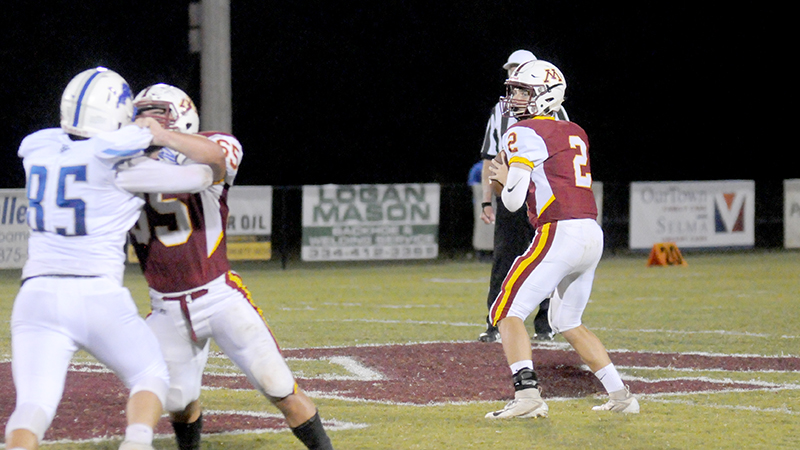 Morgan Academy quarterback Jeremy Lee takes his time and looks down field for an open receiver in the 28-14 win over Kingwood Christian on Friday night.

The No. 8 Morgan Academy Senators celebrated its homecoming with a 28-14 region win over the Kingwood Christian Lions on Friday night.

The victory became even sweeter with 1:31 left in the fourth quarter when the PA announcer told the crowd that Glenwood Academy had defeated No. 3 Tuscaloosa Academy 38-35.

The Senators players and fans cheered at the announcement because that meant the top spot in the AISA-AAA Region 1 standings is up for grabs.

No. 7 Bessemer Academy defeated Lee-Scott Academy 28-0 on Friday night, so there is a three-way tie at 3-1 in the region between Morgan, Bessemer and Tuscaloosa Academy.

The Senators, who were held to seven-points last week by Bessemer Academy, had its offense rolling early.

“We didn’t play our best game, but we were able to make plays late defensively,” Thacker said.

On Morgan’s second possession of the game, quarterback Jeremy Lee connected with Mason Perkins on a 32-yard catch for the first score of the game.

The Senators passing attack kept the ball moving against the Lions since the running game struggled to advance the ball. Morgan Academy only rushed for 77-yards, but Lee completed 13-of-23 passes or 259-yards and two touchdowns.

“They took some of the air out of us by not allowing us to run the football, so we had to put the game on Jeremy Lee, Ed Williams, Mason Perkins, Hardin Utsey and Dione Allen’s shoulders. The receivers did a great job for us tonight, and you’re never going to complain about a win.”

Williams muffed a punt at the Senators own 22-yard line and the Lions recovered the ball just outside the red zone on the first play of the second quarter. Two plays later, Lions quarterback Garrett Picklesimer threw a 22-yard touchdown pass to his tight end Garrett Helmecs to tie the game.

The good field position benefited the Lions, but the Senators defense shut them down for the remainder of the half.

Morgan scored on its next two possessions on plays to running back Holt Utsey. His first touchdown was a 1-yard run on a 12-play, 61-yard drive. His second touchdown of the game was on a broken pass play where Lee found him wide-open on the backside of the play. Lee threw it back across the field and Utsey sprinted down the field for an 82-yard touchdown reception to five his team a 21-7 lead.

On the Senators first possession after halftime, Utsey was tackled from behind and the defender landed on his right leg awkwardly. The injury sidelined the Senators leading rusher for the remainder of the game.

The Senators offense started going backwards, and on its second possession of the third quarter, Morgan Academy found itself in a fourth-and-22 situation on their opponents 34-yard line.

The Senators lined up to punt, but instead, Lee threw a 30-yard jump ball to Hardin Utsey, who came down with the catch inside the 5-yard line for a first down.

“I don’t know many people that can guard Hardin Utsey one-on-one in the state, and we’ve got a trigger-man in Lee that can throw it as well as anybody in the state,” Thacker said. “We had good position on the field, so why not try it?”

The Senators just needed to maintain their three-touchdown lead to come away with the win, but Kingwood Christian didn’t make it easy.

Lions head coach Todd Bradford successfully called a fake punt pass of his own for Picklesimer. A generous defensive pass interference call against Hardin on a slant route set up the Lions in the red zone, where they finished off the drive with a 16-yard pass from Picklesimer to Tony Ruiz.

Picklesimer picked up his offense and began completing passes left-and-right against the Senators, but time was working in Morgan Academy’s favor.

Picklesimer completed 17-of-29 passes for 158 yards and two touchdowns, but the pass-happy offense eventually backfired.

He was picked off by Senators defensive back Dione Allen with 6:31 left in the game, and his final drive of the night was ended by Hardin’s interception with 1:45 remaining.

“If we didn’t win this, the region championship was out the window,” Lee said. “We needed this.”

Morgan Academy’s next game will be a home game for the region championship against Tuscaloosa Academy on Oct. 19.