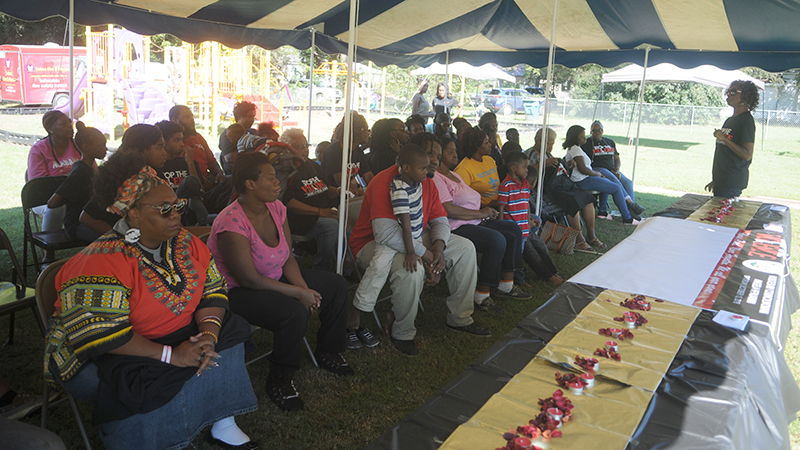 Councilwoman Angela Benjamin leads Ward 4 community members in remembering the victims and family members of those who suffered from gun violence.

Members of the community in Selma’s Ward 4 gathered together at the Ka-boom playground on First Avenue and Green Street Saturday afternoon for the “Stop The Violence” community gathering.

Concerned citizens met and fellowshipped with one another at the park before the program began. Kids played on the playground and bouncy house, while the smoke from the grill invited everyone to grab a hotdog or a plate of chicken wings.

Councilwoman Angela Benjamin wanted the event to be an inviting environment where community members could meet one another in hopes that familiarity would discourage people from resorting to gun violence.

“We’re here to remember those who have been lost to gun violence,” Benjamin said. “We’re here to tell their families that they are not forgotten. The other thing we’re here to do is move forward to be a better Selma.”

Benjamin and several other volunteers spent two hours going door-to-door in the Ward 4 neighborhood to invite people to the gathering and spread awareness about the damage that gun violence has had on the Selma community.

“When you pick up a gun, you have to realize how many families you’re affecting,” Benjamin said.

Underneath the shade of the tent, candles were setup along the table holding up the memory banner.

Benjamin invited the families of those who lost loved ones to gun violence to place their names on the memory banner, which she plans on hanging at city hall.

A candle was lit for each name called out, so everyone could see and hear how gun violence had affected their own community.

Letha Dillard, a grandmother who lost her daughter, Joy Marshaye, to gun violence years ago, came to share her story at the community gathering.

Dillard brought her daughter to Selma when her doctor recommended living in a warmer climate to help Marshaye with her asthma.

Dillard doesn’t know all of the details of the shooting since she was out of town when it occurred, but she remembers being told that her daughter was trying to diffuse an altercation between a man and his girlfriend before he began shooting.

After shooting his girlfriend, the shooter then shot Joy as she tried to get away with her 1-year-old baby in her arms, according to Dillard.

She didn’t want to come and speak because, even still, the memory of how her daughter was shot and killed still saddens her.

“I don’t like to talk about it because it makes me feel sad,” Dillard said. “Her daughter asks me the other day ‘Grandma, do you ever go to my mother’s grave?’ and I said no because it hurts me too bad. That’s all I want to say.”

Letha Dillard, who lost her daughter to gun violence, receives a hug at the Stop the Violence community gathering in Ward 4 on Saturday afternoon.

In her purse, she carries a photo of Joy. She also carries a poem she wrote after a shooting in January 2009 killed three young men.

The poem asks why the young black men have resorted to violence, and finishes with a plea for the young men to realize that they are loved and don’t need to resort to such violent measures.

“I don’t understand why our young men are in such a nervous rage here,” Dillard said. “I grew up in Selma as a child. We went through all kinds of things, but we didn’t kill each other.”

Despite not wanting to come, Dillard found the strength to share her story of how gun violence impacted her and her family.

Benjamin ended the community gathering with the “Friendly Neighbor Challenge.” A call to encourage everyone to be a friendlier neighbor.

“When I know you, it’s hard for me to pick up a gun and shoot you,” Benjamin said.