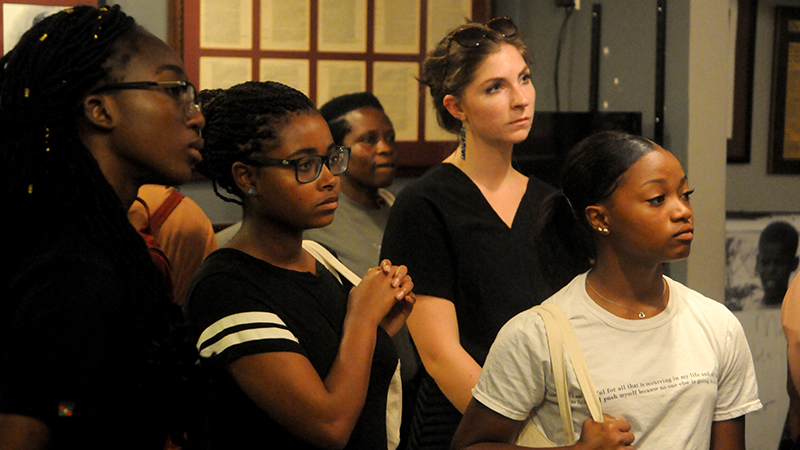 BRAVE members Djemila Compaore, Niara Ulerie, Natalina Schappach and Tnes Groves listen to the curator at the National Voting Rights Museum share stories of how life was like for Black Americans trying to register to vote.

On Monday afternoon, a group of 16 teenage girls, all from different backgrounds, walked across the Edmund Pettus Bridge together as a part of their tour of Selma.

The girls traveled to Selma as a part of a week-long road trip organized by BRAVE, a non-profit organization based in Capetown, South Africa that empowers, inspires and invests in girl leaders.

“We were started eight years ago by a group of 10-year-old girls who wanted to make their community safer,” co-founder India Baird said.

Baird, a native of Nashville, Tennessee, served as a human rights lawyer in South Africa after graduating from Ole Miss and Emory Law School. For the past eight years, she has been working with the young founders of BRAVE to help them make changes within their community.

“They lived on the front lines, it’s one of the most dangerous communities in South Africa, and we started initially to try and make the community and school safer,” she said. “Those girls, who have now graduated high school, are now working with younger girls to create a global movement to ensure that girls are inspired and empowered to become leaders.”

The group consists of a mix of students from various cities across the United States and from South Africa.

“We have girls between the ages of 12 and 18,” Baird said. “We have girls from Seattle, Atlanta, Bronx, Brooklyn and Capetown, South Africa as well. All of them really feel committed and firmly rooted in the belief that they can change their future and their community’s future.”

The two countries, separated by the Atlantic Ocean, share a common history of having to overcome social and civil injustices.

America only abolished slavery 153 years ago after abolitionists fought for the passing of the 13th amendment in 1865. Civil Rights activists have been fighting for equal treatment for people of color in America since the Reconstruction Era, through the Jim Crow Era and even still today. Voting rights activists, like the ones still on the streets in Selma encouraging passersby to register to vote, protested and fought for equal voting laws to be passed in America so that all people, regardless of color, gender or sexual orientation wouldn’t be discriminated against.

South Africa’s history follows a similar path of fighting against the injustices of Apartheid.

Apartheid in South Africa, was a system of segregation that discriminated against the Black South Africans. When the National Party came to power in South Africa in 1948, policies forced non-white South Africans to live in separate areas, use separate facilities and more. In 1950, the government banned marriages between whites and people of color.

The Apartheid laws and the segregated South shared many similarities in discriminating against people of color, and was in effect until the early 1990’s.

“When I was there, I began to see so many similarities between the challenges that we faced both in the United States and in South Africa in the Anti-Apartheid Movement and the Civil Rights struggle. I had this dream of bringing young women together from both countries to talk about the past,” Baird said. “Nelson Mandela said that we have to know our history to change the future, and I firmly believe that. I want the young people to know their history so they can change the future. For many young women in South Africa, the U.S. and around the world, they are still living in fear often in communities where there is lots of violence.”

Brave provides the opportunity for the girls to learn and experience first-hand the histories of both countries. In July, the girls traveled to Africa, and now the group is on its tour of the American South.

The trip began in Nashville and they traveled down to Montgomery where they went to the Equal Justice Initiative’s National Memorial for Peace and Justice and the Legacy Museum.

Then they made their trip to Selma, a place that they had previously only heard and read about was underneath their feet as they crossed the bridge where voting rights activists were beaten on Bloody Sunday just 53 years ago.

During their time in Selma, the girls visited the Selma Center for Nonviolence, Truth and Reconciliation, the National Voting Rights Museum and more. They had the opportunity to listen to first-hand accounts of how life was for Black people who experienced the racism and injustices of segregation.

“We came here (Selma) because what happened here is so important,” Baird said. “It was important for these young women to see and experience walking across that bridge.”

The trip to Selma had an impact on the girls in the group who absorbed as much information as they could at each of their stops in Selma.

It was Lee-anne Jenkins’, a student from Capetown, South Africa, first trip to Selma. Her experience learning about the Civil Rights Movement highlighted how similar it was to what happened in her country.

“We’ve been learning about the slavery and how Apartheid was here compared to South Africa,” she said. “For me, it’s a really sad experience to hear all these stories. It really makes me feel like I really want to step in and make a change.”

Adlai Richman, who was born in South Africa but lives in Manhattan, New York, was inspired by the BRAVE road trip to continue the work toward equality.

“I learned a lot about how hard it was for so many people and how it recent it was. It really shocked me, and I think a lot of other people, that we are still really not that far in trying to get everyone to be equal,” Richman said. “It’s really inspiring and powerful to see all of these girls coming together and learning about everything in America, and girls from South Africa learning about civil rights. It’s amazing to see how everyone is so different, but we all connect together.”

At the completion of their road trip, BRAVE will fly to New York City to share what they’ve seen, heard and learned with Deputy Secretary General of the United Nations Amina Mohammed.

“It’s quite exciting to take messages from Selma and Montgomery all the way to the U.N. because we think it’s important that the U.N. doesn’t just talk about problems overseas, but also problems and issues and see young women from all over the world, especially Americans and South Africans together united on a common cause,” Baird said.