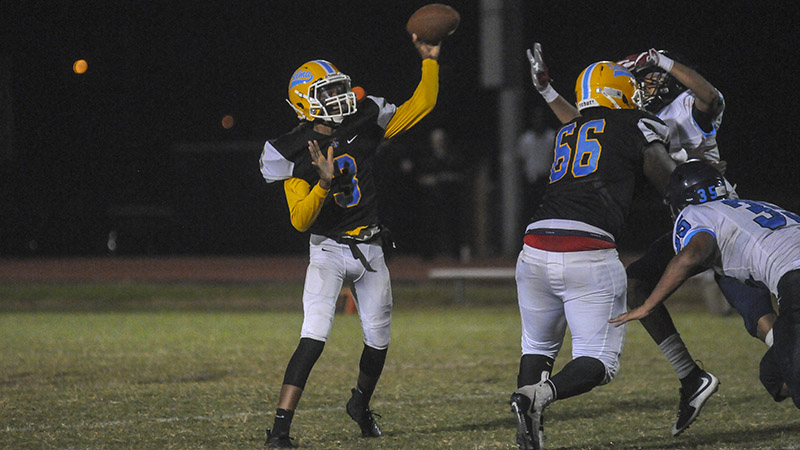 Selma High added another game to its losing streak on Friday night at Memorial Stadium in a 23-6 region loss to the Calera Eagles.

“We played a good team in Calera, but we have to continue to get better,” Selma High head coach Christopher Raymond said. “We’re not doing the little things that it’s going to take to beat good teams right now. We’re making too many mistakes offensively and defensively.”

The Saints haven’t been on a five-game losing streak since 2016, when Selma went 1-9 and lost its last five games of the season.

Selma’s offense was unable to advance the ball against the Eagles no matter what adjustments they made. Saints starting quarterback Tyreshon Freeman threw two of his three interceptions in the first quarter.

Selma was 2-for-11 on third down and 0-for-5 on fourth down conversions against Calera.

Selma running back Amarian Molette was out of the game due to injury, so Nicholas Parnell handled the bulk of the carries. He was only able to rush for 33 yards since the Saints fell behind and were forced to throw the ball.

Freeman struggled to connect with his receivers and didn’t complete a pass in the game.

The Saints trailed 7-0 to start the second quarter, and the offense switched to a wildcat formation to try and change the pace.

“We just tried to find some momentum,” Raymond said. “We tried to make something happen.”

However, the Eagles defense made the necessary adjustments and limited the Saints to small gains and forced them to turn the ball over on downs. There was nowhere for the Saints offense to go on the ground nor through the air.

Calera’s offense got off to a slow start to the game as well.

On the Eagles’ opening drive, quarterback Cornelious Brown IV was strip sacked by Selma’s Darryl Oliver and the ball was recovered by Nathaniel Acoff.

Brown missed on his first five passing attempts and finished the game 12-for-25, but the wide receiver screens opened up enough room for the Eagles playmakers to do damage when they got the chance.

Brown connected with his receiver Quin’Darius Crews for an 18-yard touchdown midway through the first quarter.

Eagles running back Ashton Shoddie scored the second touchdown of the game on 2-yard run with 3:16 left in the first-half.

Brown’s second touchdown of the game came midway through the third quarter on a 5-yard pass to William Ray in the back of the end zone, but the missed PAT left the score at 20-0.

The Saints stopped the following Eagles drive in the red zone, but Calera made the field goal attempt to extend their lead to 23-0.

In the fourth quarter, the Saints made the switch to freshman quarterback Keondre Hope. He faced constant pressure much like Freeman did.

“I tell (Hope) every day he’s got all the talent in the world, and he’s the future here,” Raymond said. “Right now, with him, it’s about him believing in himself. I believe in him and that he can get the job done. I’m going to do everything I can do to make sure he has success.”

Hope completed 8-of-18 passes, one of which was a quick pass over the middle to Freeman that went 54-yards for Hope’s first career touchdown pass.

“It felt good. Coach tells me all the time I have to read the defense before the play,” Hope said. “I saw the linebacker kept blitzing me, so I had to get the ball out of my hands as quickly as possible.”

The fourth quarter touchdown wasn’t enough to get the Saints back in the game, but it did prevent them from being shutout for the first time this season.

The Saints did get head coach Christopher Raymond back on the sidelines for the Calera game. Raymond, who was recovering from back surgery, spent the first half of the season attending the games he was healthy enough to attend.

“It’s a great day. I’m excited about the things we have going on,” Raymond said. “I just want to thank everybody for their well-wishes and blessings.”

The region loss makes Selma 0-3 in region games and places them at the bottom of the 6A Region 3 standings. The Saints have back-to-back home region games next on the schedule.

Linebacker Brodie Eiland scored the Hornets’ only touchdown on a 60-yard fumble return in the second half.

“We’re battling the injury bug,” Pigg said. “We lost another quarterback tonight and we’re down to our fourth-string quarterback. We’re playing 10 freshmen right now. There’s a positive: our young kids and our older kids are playing their guts out.”

Flowers said he was suspended by the school Administration for “undisclosed reasons” in the Panthers’ loss. Flowers also said Southside was in position to win at the end, but an interception ended its hopes.

“It was a close game and we had several chances to win at the end,” Flowers said. “We’ve got to keep moving forward.”

Tayton Molyneux threw a touchdown pass to Alex Colquitt for the Trojans’ only score.