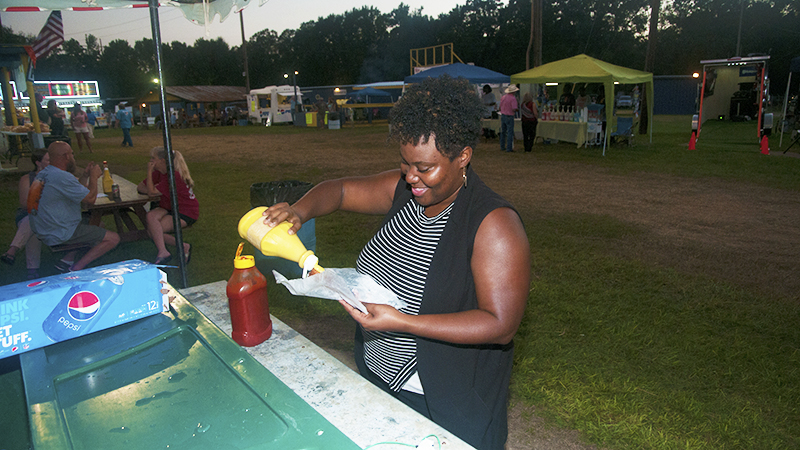 TIME TO FEAST: The Times-Journal’s very own Oniska Blevins prepares to try a Cozy Dawg for the very first time Thursday night at the Central Alabama Fair. Blevins tried an array of fair foods

For 62 years, fairgoers have been enjoying tasty treats at the Central Alabama Fair.

There were more than 10 food stations throughout Lions Fair Park, each with a list of options to try.

First up was the taco in a bag from Kim’s Pizza. The on-the-go dish had all of the taco fixings filled into a small bag of Nacho Cheese Doritos chips. For just $5, fairgoers could try out the unique spin on the classic taco.

Selma Civitan was at the fair, once again this year selling their famous Cozy Dawgs. The Cozy Dawgs are entirely locally made and have been a part of the Central Alabama Fair for many years. Fairgoers were able to try the “dawg” for $2.

Livie Grace’s Funnel Cakes had a variety of treats to choose from, however, two of their most popular items on the menu were the strawberry cheesecake funnel cake and their deep-fried Snickers bar. The strawberry cheesecake funnel cake was topped with freshly cut strawberries, powdered sugar, glaze and a slice of plain cheesecake. At first glance, the deep-fried Snickers looked like a corn dog covered in chocolate syrup and powdered sugar, but once bitten into the familiar flavors of a snicker bar were prevalent. The gooey snack cost $5.

If those deals weren’t sweet enough, local vendor Je’Shema had multiple flavors of snow cones for $1 each. Guests could even mix it up a little for an additional 25 cents. Je’Shema can also be seen selling their snow cones at several other events throughout Selma and Dallas County.

Even though the newcomers were present, the classics were still hanging in there this year as well. Polish sausages, candy apples cotton candy and more were all available to fairgoers as they enjoyed the fair this week.