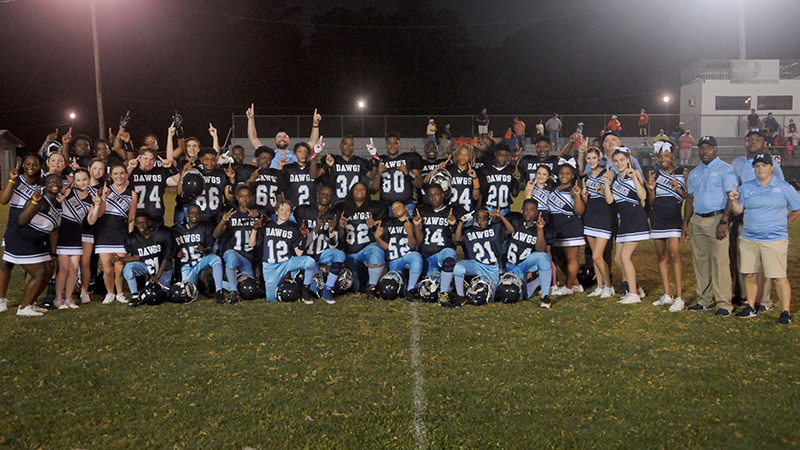 The Martin Middle Bulldogs football team stepped on to Martin Field at Dallas County High School with a perfect record on Thursday afternoon, and they walked off the field the same way after defeating Clanton Middle 22-12.

“We’re just excited that we were able to fight through adversity,” Bulldogs head coach Bertram Crum said. “My kids put in the work, and I thank God for them sticking in and believing in what we (the coaches) were trying to teach them.”

The Bulldogs went 6-0 this season. This is the second year in a row that Martin Middle has finished its football season with a zero in the loss column.

The Bulldogs entered this season with a new coach and the players had to adjust to a new style of football.

“They accepted me. They accepted what I was trying to teach them, and they bought in,” Crum said. “I’m excited for them. We put in the work and we’re just grateful for that.”

The Bulldogs struck first against Clanton, but it wasn’t until late in the first quarter. Running back Michael Harris scored the Bulldogs’ first touchdown on a 12-yard run, and Lamarian Hatcher ran in the 2-point conversion to give the team an 8-0 lead.

The Bulldogs scored again with two minutes left in the second quarter on a 1-yard run by Daveon Jones, but the 2-point conversion failed and the score was 14-0.

Clanton struck back before halftime and completed a touchdown pass against a blown coverage assignment. The Clanton receiver juked the only player standing in his path and sprinted to the end one to cut the lead to 14-6.

At halftime, the Martin Middle Homecoming Court was recognized on the field while the teams rested in opposite end zones.

The Bulldogs running game continued to break for big runs and the team methodically worked its way downfield against Clanton.

Martin worked its way inside the five-yard line, but Clanton’s defense stuffed the short yardage runs. Bulldogs quarterback Corey Martin then went to the air and tossed a 1-yard touchdown pass to Jamichael Goings. Hatcher’s 2-point conversion run gave the Bulldogs a 22-6 lead with 19 seconds remaining in the third quarter.

The Bulldogs just needed to hold on to its lead to maintain its perfect season. Clanton scored one more time on a 14-yard run, but once again failed the 2-point conversion attempt.

Martin Middle held on to its 10-point lead for the remainder of the game and Goings put the game away with an interception in the final seconds.