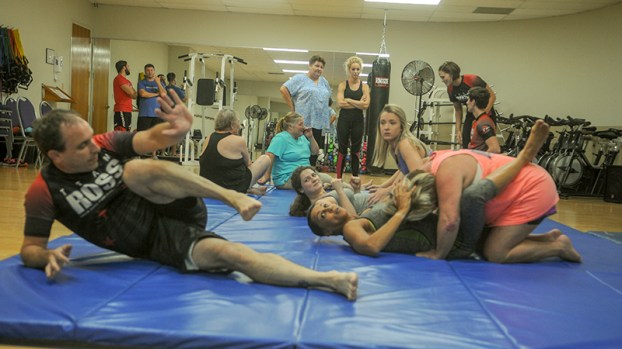 Ross Martial Arts instructor Jay Russell demonstrates how to get out from under an attacker during the Diva Self Defense class at InShape Fitness on Sunday.

The hardwood floor of the aerobics room at InShape Fitness was covered by a protective blue mat on Sunday afternoon for a unique class that was brought to Selma.

Ross Martial Arts, a full-service combat sports academy based in Demopolis, put on its Diva Self-Defense class to introduce women to several basic moves for protection and evasion.

Co-owners Ronda “Lady Fighter” Russell and her husband Jay Russell, led 11 women through the class and taught them how to disengage from common holds, escape from a pinned-down position and deliver effective strikes if necessary.

“Diva Self Defense is all about being empowered and bold and standing up for yourself,” Ronda said. “A lot of women really want to learn self-defense, but they really want to go and have to take an actual martial arts class with men and women in it. So, this is our way of introducing what martial arts can do for them as far as self-defense. It was really important for us to show them the little bit that we know that will work from both of those arts (Jiu Jitsu and Taekwondo) to help them develop their own self-defense.” 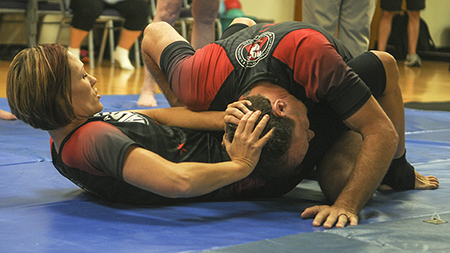 Ronda Russell demonstrates to the class how to separate themselves from beneath an attacker.

Ronda and Jay would demonstrate on each other before allowing the participants to partner up and practice the moves on each other.

It took a few attempts and several awkward entanglements to get it right, but by the end of the class, the women had picked up a new skill set that they didn’t have before.

“The women that were here were all new,” Ronda said. “This is our first time coming to Selma and doing a self-defense class, so we were really grateful for them to take an opportunity to learn. They did really well.”

In addition to walking the women through the moves, Ronda explained the different types of scenarios for each one. She walked them through how each strike or counter could be used should they be caught in a situation where they needed to defend themselves.

“We want to empower them, so they know that there are ways to get out of things,” Ronda said. “They just didn’t know them yet. There’s almost never a bad situation that you can’t get out of, but you just might not know how to get out of it.”

The self-defense class isn’t for show or competition, but to help women be prepared for real-life situations. The techniques and skills they learned can be applied to rape, domestic violence and other situations that involves unwanted contact.

Selma resident Courtney Hemphill, who observed the self-defense class while she waited for the Jiu Jitsu class to begin, trains at Ross Martial Arts and invited Ronda and Jay to being the classes to Selma.

“With all the crime in the town, I thought the women would like a self-defense class and know more about how to protect themselves,” Hemphill said. “It makes me more confident because you’re more desensitized to that. When you haven’t trained in anything and someone attacks you, then you’re going to freeze up and not know what to do. But if you’re around combat sports on a daily basis, then you know what to do and it makes you more confident.”

Millie Motes, one of the younger participants in the class, walked away feeling confident that she could defend herself if she needed to.

“I just thought it would be a really good experience, and I could learn some useful tips in case something like this ever happened,” she said. “I feel really prepared. I feel like I could definitely get away and hopefully cause some harm if I needed to.”

The Autaugaville Eagles picked up their first win of the season on Friday night at Memorial Stadium in a 42-8... read more