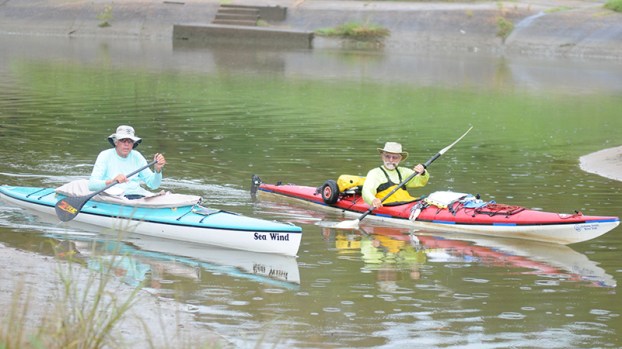 John Denton (left) and his cousin Will Denton (right) paddle out of the Selma City Marina on Monday afternoon to continue their 650-mile journey on one of the Alabama Scenic River Trails.

Will Denton and his cousin John Denton took the road less traveled as they paddled into Selma on Monday afternoon.

They pulled their kayaks up onto the boat ramp at the Selma City Marina, and walked up to The Sandbar for lunch after spending the morning traversing 29 miles on the Alabama River.

Will, 79, ordered a grilled chicken salad, while John, 66, ordered a shrimp salad, which was a welcome break from the peanut butter and jelly sandwiches and snacks in their dry bags.

The kayaking duo have been following one of the Alabama Scenic River Trails (ASRT), and are working their way down the waterways until they reach Ft. Morgan. 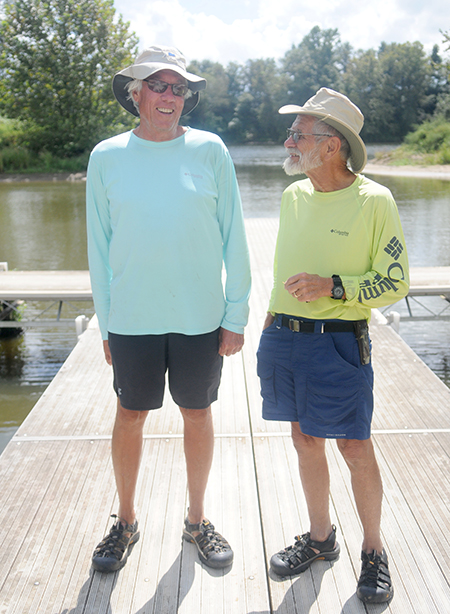 The ASRT has more than 5,300 miles of accessible waterways throughout the state. They started on the first of September near the Georgia line, and have already tackled more than 200 of their 650-mile journey.

“It wasn’t the length of the trip that mattered,” Will said. “The main reason we chose the Alabama Scenic River Trail is because it was close to home.”

The two adventure seekers aren’t new to the outdoors scene. In 2015, they encouraged some of their family members to join them rafting down Rio Grande River through the Grand Canyon.

However, for Will and John’s first kayak trip, they wanted a challenge. The plan was initially to ride down the Mississippi River, but Will, who lives in Lake Martin, wanted to start closer to home.

“I was planning on doing a trip down the Mississippi River, but my cousin Will decided it would be a good idea to do the Alabama Scenic River Trail first,” John said.

“I live here and John hasn’t done a lot of kayaking and paddling, and I haven’t either. He just finished hiking the Appalachian trail, so he knows how to camp. I haven’t camped in a long time, and I didn’t know if I could still sleep on the ground. I figured if we did the Alabama Scenic River Trail, then we’d be close to home, close to friends and if we decided this wasn’t for us we could call somebody to come get us,” Will said.

So far, the journey has been smooth for the Denton cousins. They had decent weather on their travels, aside from a few brief rain showers. They average 20 miles per day on the water, and only get out to get around dams or setup camp for the night.

“It’s been great,” John said. “We’ve met a lot of nice people and seen a lot of wildlife. We see an eagle almost every day. We’ve seen a bobcat, deer, wild turkeys, a cottonmouth and no alligators. Not yet.”

They are traveling light and only carrying with them what fits into their kayaks. It helps them focus on the task at hand, but sometimes, they need assistance.

The ASRT has volunteer River Angels spread throughout the state who offer assistance to adventurers like Will and John.

They offer whatever help they can to help travelers along their journey, whether it be to restock on supplies, providing a place to shower and camp or simply handing off a cool drink for rehydration.

Will and John have utilized the help of the River Angels that have helped them this far on their journey, and were thankful for the volunteers who went out of their way to help them.

Before Will and John left The Sandbar, a heavy rain came down over Selma. The storm marooned them underneath the tin cover at the marina, but they weren’t in a rush. They covered their exposed gear so the rain wouldn’t collect inside their kayaks, and they patiently waited out the storm.

Will chewed on his cigar, holding it by the edge to the side of his mouth as he chatted with his cousin about their next stop down the river.

Once the rain cleared, Will stepped into his 17.5 foot, single touring kayak and John stepped into his light-blue Kruger Sea Wind canoe. In less than 10 minutes after the rain stopped, both were in the water and ready to continue their journey. 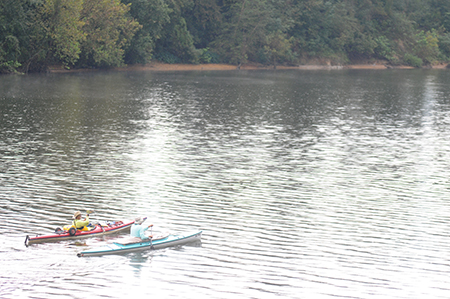 John Denton and Will Denton continue down the Alabama River.

Side-by-side, the paddled downstream and around the bend of the river toward their next stop.

“It’s been fantastic,” Will said. “I’ve got the greatest cousin in the world.”

Jeremy Cook, a 37-year-old Army veteran, doesn’t leave his home in Columbus, Georgia much now. He served in the Army... read more