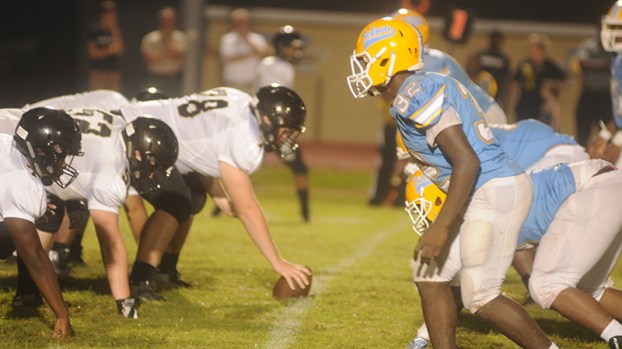 Selma’s defense lines up against the McAdory Yellow Jackets on Friday night.

The Selma High Saints (1-3) couldn’t stop the McAdory Yellow Jackets (5-0) from running the ball, and lost its first home game of the season 32-16 at Memorial Stadium on Friday night.

The two touchdowns for the Saints came in the first and fourth quarter.

Selma scored the first touchdown of the game with a connection from quarterback Tyreshon Freeman to receiver Gabriel Wade.

The third quarter touchdown saw a 5-yard run from Saints running back Amarian Molette, leaving the score at 25-16 with 11:51 left in the fourth quarter.

“The touchdown in the first quarter was big,” said Wilson. “We struck blood first. We had the momentum, and a great connection between Tyreshon and Gabriel.

“The second touchdown, we just wanted to punch the ball in, and we were inside the five, and we had Amarian get in the end zone,” said Wilson. “That gave the guys a little life and they saw that we were really close, but we just couldn’t get the momentum to swing back our way.”

Wilson said the last three teams the Saints have faced have ran the ball.

“Last week, we came out and set down to run and this week we would have liked to have come out and done the same thing, but we just didn’t execute,” said Wilson. “The guys just didn’t get to the ball and make plays that we should have.”

The game against McAdory was not a region game, although the two teams were in the same region last year.

In 2017, McAdory defeated Selma 28-6, and this year, McAdory remains undefeated.

Up until their encounter with the Saints this season, McAdory’s defense had not allowed an opponent to score more than 13 points in a game.

The Saints hit the road next week to face Linden.

“We will watch the film and see what Linden likes to do,” said Wilson “But we need to get better at fundamental things.”

“Communication is key,” Wilson said. “They need to get better at guys pointing out and communicating with each other letting each other know what their assignments are and just executing it.”