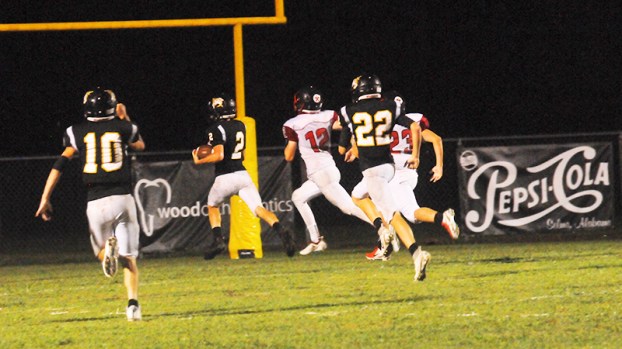 Meadowview Christian Trojans were bested by the Jackson Academy Eagles 67-6 Friday night. This makes Meadowview’s second loss of the season.

Meadowview Christian head coach Bob Taylor said the team made a lot of mistakes and could have done better.

“We didn’t play well at all,” he said. “That ultimately comes back to me. I thought we had a good week at practice, but obviously, we did not so we gotta get some things corrected.”

The Trojans fought hard to keep up with the Eagles’ offense as they scored back to back touchdowns and going for six two-point conversions during the first half. The Eagles led the Trojans 59-0 into the second half of the game.

“Jackson did a great job running their offense,” Taylor said. “I was kind of afraid of this a little bit, but we had a good week of practice and we just didn’t execute at all tonight.”

The Trojans came into the second half with a little more confidence and defense as they put a little bit more pressure on the Jackson offense. The Trojans forced a turnover from the Eagles that was quickly recovered by Meadowview junior Cole Smith. The play ended up being a big one for the Trojans after Zack Duke scored Meadowview’s first touchdown of the night with 1:05 left in the third quarter making the score 59-6. The Trojans then went for a two-point conversion but were unsuccessful.

“We had a nice little discussion at half time about continuing to try to play hard and continuing to try to do things the right way,” Taylor said. “We did execute a little bit better in the second half than we did in the first half, but we just have a ways to go to get them to understand what we’re trying to accomplish.”

The Trojans will take on Pickens Academy Friday, Sept. 7 at Meadowview Christian School.