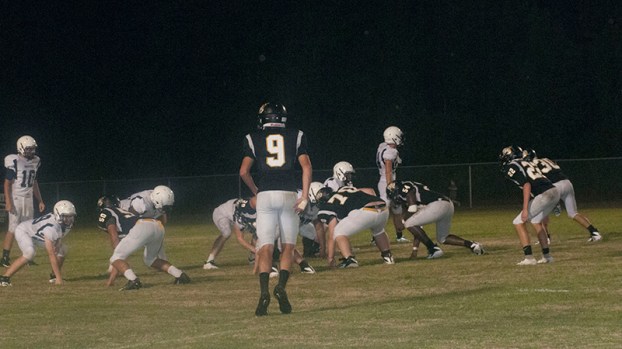 Meadowview head football coach, Bob Taylor, said it felt good to be able to play an 11-man game after so many years.

“It was a big thing for our school to be able to do that,” Taylor said.

Taylor said the team made a lot of errors during the game, but he said they can be corrected with more experience. He said this is a learning curve for the young team.

“We’re a young football team,” Taylor said. “We have a lot of ninth-grade freshman getting into the game. It’s a learning process.”

The second quarter started with the Warriors in the lead with 19-0. Early into the quarter Meadowview was penalized a false start. A few more minutes into the quarter the Warriors had the first turnover of the game at the 40-yard line, caused by Meadowview’s star player Zack Duke. However, due to a slight injury while causing the turnover, Duke had to sit out for the rest of the game.

The second quarter ended with 26-0. Even with the Warriors being up 26 points, the Trojans came back in the game with a fighting spirit.

Taylor said at the half, he encouraged the team to follow through and execute more.

“[Our conversation], was just to go out and execute,” Taylor said. “Go out and try to do the little things right. At times, we do and at times we don’t.”

The Warriors then scored one more time in the fourth quarter, making the final score 54-6.

Selma High has high expectations for its offense this season. Running backs Nick Parnell and Amarian Molette each ran for... read more