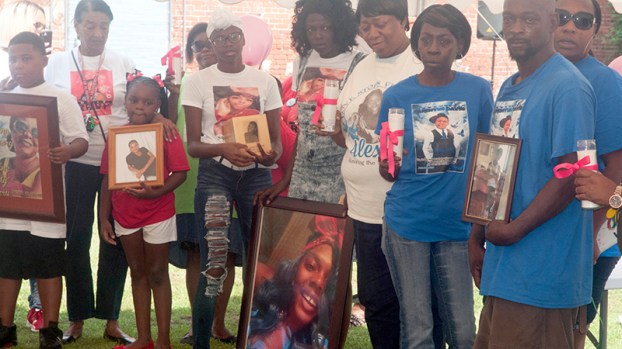 Members of the community gathered for the No More Silence, End Gun Violence vigil on Saturday at Phoenix Park.

The group released balloons in honor of those that have died over the years to gun violence.

“Talk to young people about gun violence,” she said. “It is very important in our community, and in our community, we strive. We deal with the gunshots. We see what it is like. That is why I as a council person have been making noise letting people know about this. Love your brothers and sisters. People like me and you will keep voicing, and we will let them know we are tired. No more gun violence.

“We love each other,” she said. “Gun violence is not the way. That is not the way to raise our children. This is just the start. Let’s continue after today. Let’s grow and let our voices be heard in the city of Selma that we want no more gun violence.”

Dr. Morgan King, a cousin of Rayford, also spoke to the crowd.

“When I learned that Kenbranesha was killed it hurt me on three different levels,” she said. “The first level was when I lost my cousin. I live in Ferguson, Missouri so there was only so many times that I could come and visit my family, and then also try to get on with my life and do something better for my community.

“I also mourned her as an officer,” said King. “I was a police officer for the city of St. Louis, and all this gun violence and all these lives that we have to put down is not worth it. We have a lot of valuable members of this community who could have made a difference, but they are not here with us anymore, and that’s just sad.

“I also mourned her as a member of the community,” she said. “Because I’m a doctor and my goal is to make sure that my family members can follow in my footsteps so that we can end some of these generational curses that we have. We need more doctors, we need more lawyers and we need more everybody.

“We can do more,” she said. “We can do anything. We can’t allow anyone to make us think that we are not valuable. Our goal is to make sure that all the kids in our family grow up to become something. We can’t have any more Mike Browns. We have lost too many people. Let’s just take one step forward and see if we can do better.”

“Everyday, young people are constantly reminded of gun violence from hearing the gunshots at night or losing family and friends to gun violence,” she said. “As of April 17, gun violence archives have recorded 4,140 dead and 7,298 injuries in 2018. In 2016 alone, more than 38,000 died from gunshot wounds.”

“The question becomes what do we do at this point?” he said. “We need to understand why we have this gun violence. Find out what is on their mind. We need to teach conflict resolution. To disagree we don’t need a gun or a knife.”

“The death of a child means more than just a precious life lost,” she said. “It represents a loss of future experiences. No parent is prepared for this loss, and when it happens, their lives are changed forever. Our mission is to safeguard lives, property and to aggressively enforce the local, state and federal laws, and to facilitate a community partnership, and to represent the constitutional rights to all citizens. We are committed to bringing justice to all families affected by gun violence in our city.”

Fowlkes also shared how she lost her mother gun violence.

“The loss of any loved one hurts,” she said. “We are here to help put an end to this violence.”

“My daughter was killed,” said an emotional Lakeisha. “She was killed Oct. 22, 2017. A lot of people knew her, and she was very smart. I don’t know the words to say, but no parent should have to lose their child.”

The Selma and Dallas County Chamber of Commerce and Tourism Information along with Dianne Harris led a tour group from... read more