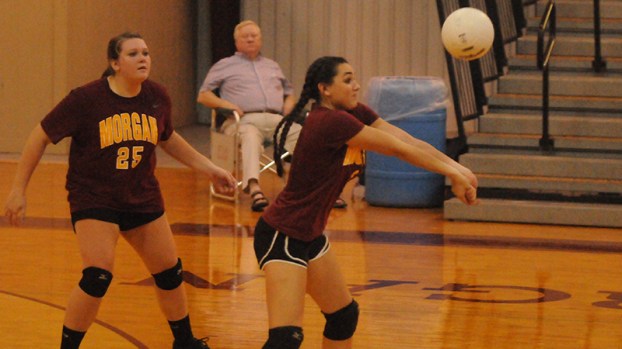 Morgan Academy’s Kenley Kauffman sets up her teammates during the season opener against Marengo Academy on Thursday night.

The first serve of the season for the Morgan Academy Senators volleyball team sailed past the end line Thursday afternoon against the Marengo Academy, and the team continued to play from behind the rest of the night.

“I think they just had first set jitters,” Morgan Academy head volleyball coach Kayla Thacker said. “We know the things we have to work on.”

The missed opportunity led to Marengo scoring the first three points of the set, and a lead that Marengo refused to relinquish in their three-game sweep of Morgan Academy.

Piece-by-piece, Marengo Academy chipped away at Morgan Academy in the first set. They didn’t allow the Senators to hold serve for more than two points at a time.

Miscues, unforced errors and some impressive rallies by Marengo wore down the Senators, who lost the first set 25-14.

After losing the first set, the Senators regrouped and played a tighter second set.

Power-hitter Tindall Albritton only had one ace for the Senators in the first set, but she had two in the second. She also  had two of the teams’ five kills in the second set as well.

The Senators were even with Marengo at 11-11 before they fell behind. Marengo went on a five-point run followed by a seven-point run to extend their lead to 23-12.

Morgan Academy attempted a late rally, but weren’t able to comeback before Marengo won the set 25-18.

Down two sets, Morgan needed to win the next set to keep the match alive. The third set got off to a good start with Morgan winning the first point, but the Senators allowed four straight points to Marengo immediately after.

Thacker took a timeout trailing 8-2, which helped the team get back into the set. At the next timeout, it was Marengo that needed a break after the Senators had cut the score to 10-7.

The Senators had settled down from the first two sets, and improved through the first half of the third set.

Then Marengo went on a seven-point hot streak that effectively put the set away. Marengo won the final set 25-17 and spoiled the Senators’ home opener.

Despite the outcome, the Senators looked better than the score reflected. The girls were getting to balls, diving on the floor and setting up kills. Individually the team was stronger than they were at this point last season, but bringing the talent together still needs to be fine-tuned.

A new player on this year’s team, Maggie Colley, had an impressive match for the Senators. Along with her great defense diving for balls, she also scored several kills for Morgan as well.

“She’s a wonderful defensive player,” Thacker said. “She gets everything she can possibly get to and returns it. She’s a consistent hitter from the back row and an all-around great player.

“We have a lot of talented girls, and we have so many that it’s hard to find the six that you need to put out there at the right time,” Thacker said. “We’re just trying to figure that out. We worked really hard this summer to get stronger and better at the game. You can tell by the way they move on the court and hit the ball that they have gotten stronger. It didn’t go like we wanted it to today, but we know the things we need to work on now.”

Morgan’s next game is on Monday at home against Fort Dale. The junior varsity team plays at 4:30 p.m. and the varsity team immediately after.

The Dallas County versus Selma High Jamboree game brings the biggest schools in the county together for a preseason rivalry... read more