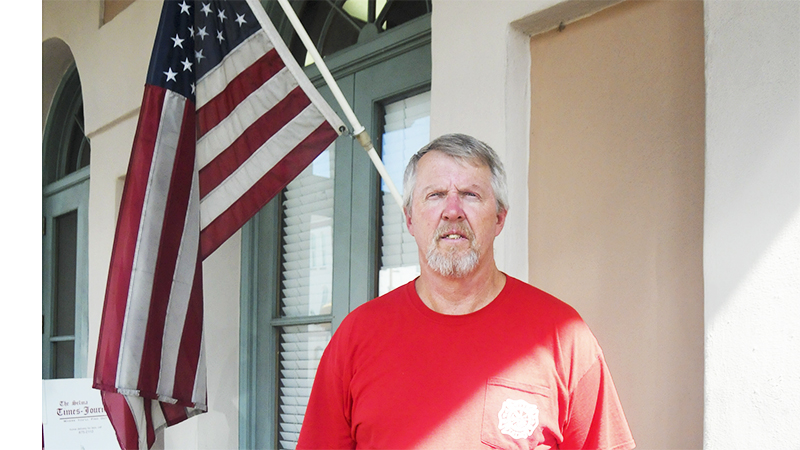 FIGHTING FOR LIVES: Mathew Giles has been a volunteer with the Poster’s Station Volunteer Fire Department for more than one year. Giles is the Time’s-Journal’s First Responder of the week.

After 32 years with Bush Hog, Matthew Giles never thought he would one day become a volunteer fire fighter. However, for the past year and a half he has been suiting up and fighting fires with the Potter’s Station Volunteer Fire Department.

“Ten years ago I would have never thought I’d be doing this, but I like it,” he said.

“She asked me one day if I wanted to go to the meeting, so I went with her,” he said. “They asked me about volunteering and the rest is history.”

Arriving on each scene is different, according to Giles, but it feels better when the team is in the company of firefighters that risk their lives and fight fires full time.

He said their experience of working with calls full time is unmatched and by working alongside them he and his wife can pick up on that knowledge and be able to save even more lives.

“We have made medical assistance calls, we have been called to house fires, gas fires, vehicle accidents and just basically whatever comes along,” he said.

Giles said his giving heart is one of the main reasons he has decided to keep serving with the department. His mornings start early for his job with Bush Hog, and sometimes when there are early morning phone calls he is disappointed when he cannot suit up and help someone in need.

“I like helping when I can and it bothers me sometimes when they call at three or four in the morning and I have to be at work in an hour,” he said. “I know everyone else is going and I can’t. That bothers me.”

Giles said he and his wife are happy to continue serving the community and he is glad he took her up on her offer of joining the team.