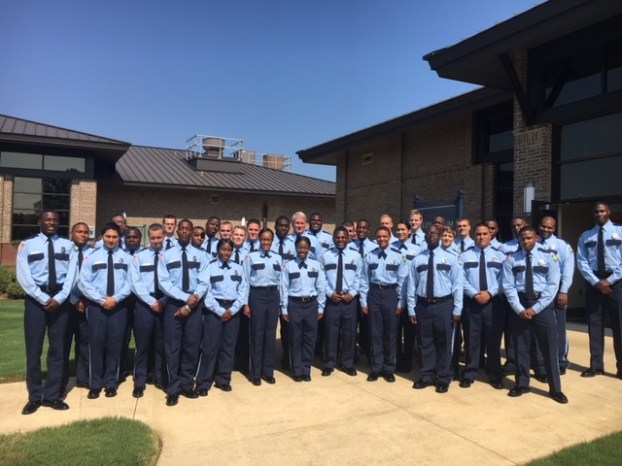 Thirty-seven officers graduated from the Alabama Corrections Academy on Wednesday at the Alabama Criminal Justice Academy Training Center in Selma.

Alabama Corrections Academy Director Elliott Sanders praised the Class of 2018-02 for their dedication. The group initially began with 47, but 10 did not make the cut.

“They worked hard over the last several weeks and made great sacrifices,” Sanders said. “Thank you for stepping up to the challenge. It involved them doing things they didn’t want to do, but they did it anyway.”

Alabama Department of Corrections Associate Commissioner Matthew Brand discussed three things to the new officers in his commencement address: integrity, service before self and professionalism.

“I describe integrity as doing the right thing when no one is looking,” Brand said. “The greatest thing about integrity is no one can take it from you. Service before self is stepping between the good guys and bad guys and being our protector.

“Professionalism is treating with the public with courtesy and respect, even when it’s not reciprocated back to you,” he said. “ Being professional is communicating with your supervisor and peers with respect. A professional does not complain.”

“Seek help from your supervisor and co-workers whenever you need help,” Wallace said. “I look forward to celebrating your promotions and success in the future.”

Wallace earned the Director’s Award and was recognized as President.  Alan Anderson and Scott Schuttinga also earned the Distinguished Award.