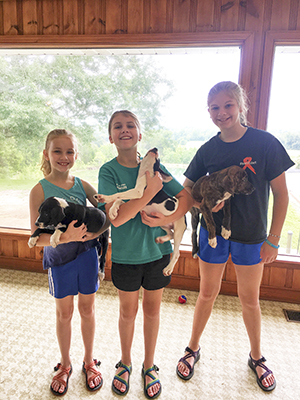 Every Tuesday, sisters Ellis Anne McHugh, Keenan Lee McHugh and Delaney McHugh visit the Sky Hill Animal Society to love on the dogs. The property is an oasis where dogs are trained and socialized to get them ready for adoption.  The organization works in conjunction with the Selma Animal Shelter to provide a temporary home for the dogs until they find a forever home.

Lynn Sanders said the sisters have spent months getting to know and help with the training of some of the newer additions to the Sky Hill family.

“These girls have put the work into these puppies to make them sociable so that people can adopt them,” Sanders said.

Not only are the sisters involved with the puppies, they also interact with the bigger dogs as well.

“These girls are good, especially the older ones, about going outside to play fetch with the bigger dogs and practice their obedience with them,” Sanders said.

Sanders said aside from play, the girls also help with getting the puppies acclimated to new people, textures and sounds. She said doing those things help the puppies adjust to different environments, which in turn, helps their chances of being adopted.

Ellis Anne McHugh recalled one of the ways she helped the young puppies with the texture technique.

“Whenever I sat in the puppy pin when they were really young, I would always roll this toy down their backs and on their heads and making sure not to touch their eyes or anything,” Ellis Anne McHugh said.

Keenan McHugh said just by spending time with the dogs is helpful to them.

“I’ve learned that if dogs don’t have anyone to play with they are really shy their wholes lives, so they need people to come out here and play with them,” Keenan Lee McHugh said. “It’s really good for the dogs, and we were looking for somewhere to volunteer.”

Delaney McHugh said not only is spending time with the dogs helpful, but getting to play with them during that time is the best part.

Even though these sisters enjoy being with the dogs, there was a little fear from the youngest sister, Ellis Anne McHugh, when it came to the bigger dogs.

However, Sanders said she has really conquered her fears of the big dogs with the encouragement and help of her sisters.

Delaney McHugh recalled a specific time she reassured her younger sister of her safety around the dogs.

“When we were walking downstairs and Ellis Anne was afraid of the bigger dogs, I was like ‘It’s ok they aren’t gonna hurt you,’” Delaney McHugh said.

The sisters said their bond became stronger because of the work they do at Sky Hill.

“When we’re at home we fight a lot, but when we’re here the only thing we fight about is who’s gonna get which dog,” Ellis Anne McHugh said.

The girls’ mother, Kim McHugh, has also noticed how taking care of the dogs brought them closer.

“They talk about them at home,” Kim McHugh said. “They [talk about] ‘this one or that one got adopted.’”

Sanders said she has seen changes in both the puppies as well as the sisters. She said she looks forward to see what both are going to learn next.