Local, state and Federal Agencies work together to guns off the streets in Dallas County area 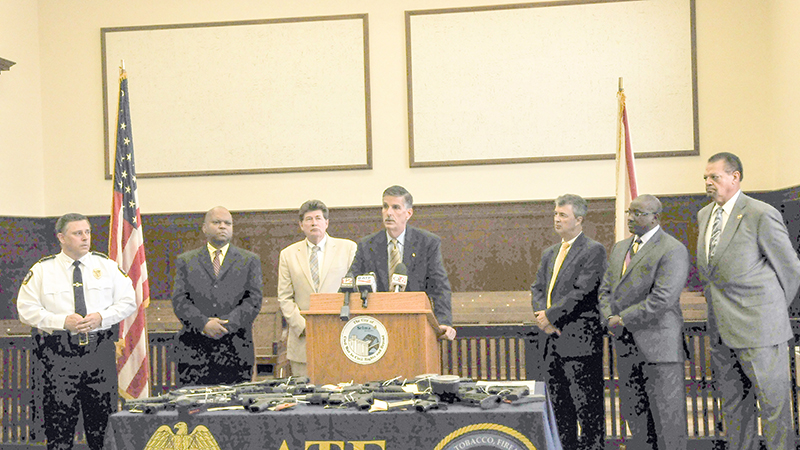 The U.S. Attorney’s Office and the Bureau of Alcohol, Tobacco, Firearms and Explosives (ATF) formed a successful partnership with the Selma Police Department and the Gulf Coast Region to reduce gun violence.

against 24 defendants, and about 50 guns taken off the streets.

“The key to reducing crime is collaborating and information sharing,” Collier said.

Jackson said he received complaints from Dallas County residents about eliminating violence in the area.

“A lot of citizens have been complaining and asking for help,” Jackson said. “The gang violence has gotten out of control and spreading out in other areas.”

Marshall praised the local, state and federal agencies for working together to solve crime in the area and across the state.

“It’s very important,” Marshall said. “The collaboration is a force multiplier for law enforcement and prosecution. We want to continue to talk about doing what’s best for Dallas County.”

For Hyche, the group is focused long-term on ending violence in the Black Belt.

“We’re making a commitment to working with the Selma Police Department and the Fourth Judicial District to getting the criminals off the streets of Selma,” Hyche said.

“The crimes that occur in Selma has bled into my district,” Franklin said. “I’m delighted to be part of this partnership.”

Moore believes the level of gun violence in the state’s Southern District is too high and wants that number reduced.

“The U.S. Attorney’s Office will stand with the citizens of our district to insist on our streets being safe for our children and particularly safe from gun violence,” Moore said. “Our office in the near future will have a greater presence in Selma as a part of this new initiative.”

ATF’s Crime Gun Intelligence resources include firearms tracing, the use of the National Integrated Ballistic Information Network (NIBIN) and the issues surrounding stolen firearms from the public. All 24 defendants facing current gun charges have multiple prior felony convictions.

“ATF and our partners are committed to removing the criminal element from the streets of Selma,” Watson said. “ATF Crime Gun Intelligence Centers are the driving force to reducing the violent crime and disrupting the shooting cycle that plagues our neighborhoods.”