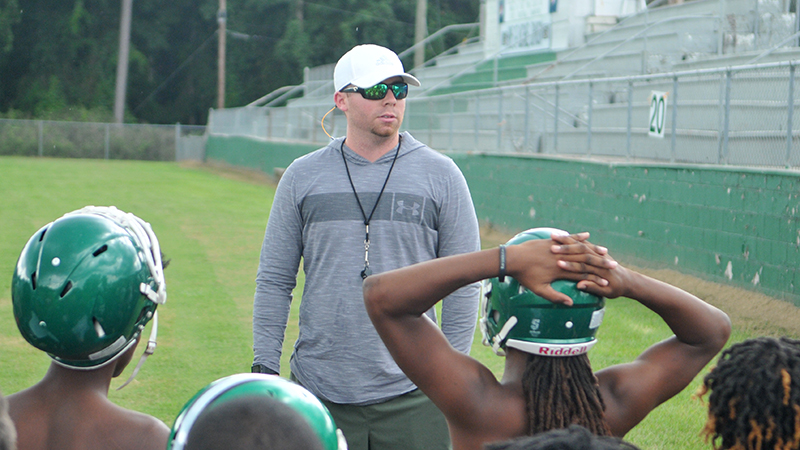 Dallas County’s new head football coach Zeke Pigg gets the team’s attention before practice began on Tuesday afternoon. Pigg was a former assistant coach at Faulkner University and with the Tallassee Tigers.

After the 2017-2018 school year ended, the Dallas County High School football program needed a new head coach to lead them through the summer and prepare the team for this upcoming season.

Former head coach Cliff Matthews led the team through spring practice, but the school opened the search for a new coach after his contract wasn’t renewed.

During a summer where Dallas County also needed a new principal after Willie Moore stepped down from his position, the hiring of the new head football coach was silently executed through a personnel vote by the Dallas County School Board.

Zeke Pigg, 27, joined the Hornets football program in the middle of the summer break, and began working with the team during summer workouts.

“I had a lot of kids show up this summer,” he said. “I averaged 28 kids at first, and about midway through July we averaged about 32, 33. Now, with my whole team out, we’re looking at 45 to 50 kids in my first year. As the season progresses, the expectations grow higher.”

This will be his first year as the head coach of a varsity football team. Orginally from Florence, Alabama, he played defensive back in college for two years at Lambuth University and two years at Faulkner University.

In his two seasons at Faulkner, Pigg played in 21 games and collected 155 total tackles. He had two fumble recoveries and two interceptions in his career with the Eagles.

After his playing career, he remained with his alma mater as a student assistant with the football team in 2013. The following year, he was hired as an assistant coach with Tallassee High School. In 2015, he was a defensive graduate assistant again with the Eagles.

While he was going back and forth between the high school and collegiate football programs, Pigg earned his degree in mathematics from Faulkner in 2014, and was pursuing his masters in teaching at the university as well.

His experience at Faulkner set him up to be a successful assistant coach for Tallassee football. For the past two seasons, in which Pigg was the line backers and secondary coach, the Tallassee Tigers went 19-6 and made two playoff appearances. Last season, the Tigers reached the second round of the Class 4A playoffs and only allowed 21 points per game to opponents.

Pigg’s defensive background should benefit the Hornets, who gave up 36.7 points per game to opponents last year.

“I love high school football at the end of the day,” he said. “I coached college football for three years, and there’s nothing in comparison with Friday nights when you get the whole community out and all the kids are excited.

“This is something I’ve wanted to do my whole life,” Pigg said. “I felt that I could do it and jumped right into it. I inherited a 3-7 program and I look at it like this. Each day, we’re going to chip away at it. At the end of the day, as long as these kids are working hard and doing the right thing, we’re going to get stuff done.”

In his new role with the Hornets, Pigg wants to bring the same energy, grit and accountability that he had in Tallassee to Dallas County. After last year’s losing season, he understands that the Hornets are a work in progress, but he believes they can get there.

“What brought me here was that I knew there were athletes here, and I knew they had a lot of potential,” Pigg said. “The kids have been great … We’ve got potential, but we’re starting at the bottom right now and hopefully we’ll make our way to the top eventually. But right now, I’m just trying to get these kids to play hard and understand what the expectations are.”

Settling into a new program can take some time, but the returning players for Dallas County have been in stride with Pigg since the summer.

“A lot of the returning players have been here every day,” Pigg said. “They want to win. These kids are striving every single day to work hard.”

The Hornets have already started practice this season, and the whole team is looking forward to putting on pads and getting ready to go full contact.

“We’re teaching them how to finish,” Pigg said. “We’re ready to put the pads on and hit something. I know that it’s been a long time coming and it sneaks up on you every single day, but we play in 14 days. We’re excited for it.”