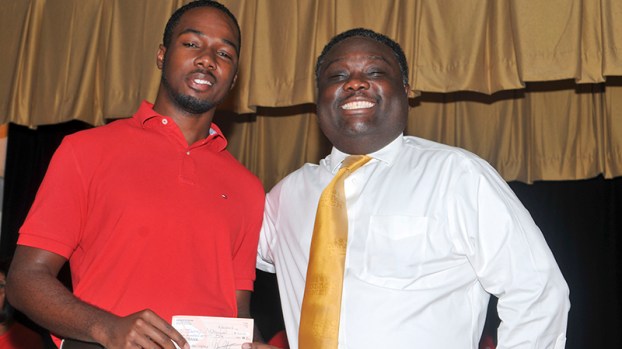 Muhammad was presented a check for $500 from Billy Young, 100 Black Men of Selma President.  He will attend Alabama A&M this fall.

“It’s a blessing, I feel so honored and privileged,” Muhammad said. “It feels great to receive help from a great organization.”

Each year Muhammad attends school at Alabama A&M, he will receive $500 from the 100 Black Men of Selma as long as he maintains a 2.5 GPA.

“This young man represents the best of us,” Young said.

Muhammad will major in mechanical engineering at Alabama A&M and heads to its Huntsville campus this weekend.

One hundred Black Men of Selma member Charles Johnson is impressed with the leadership of Muhammad.

“He appears to be focused and has his mind set on going somewhere,” Johnson said.  “He’s a solid student.”

Earlier in the spring, Muhammad was the 2018 Paul M. Grist Boy of the Year. The award is named for Paul M. Grist, who served as director at the YMCA of Selma-Dallas County from 1919 until 1934. He also was given the Bill Ellzey Scholarship, a value of $1,000.

Back To School drive called a success

The first day of school has arrived, and Shereva Purifoy’s Back to School Drive has concluded. The supply drive on... read more