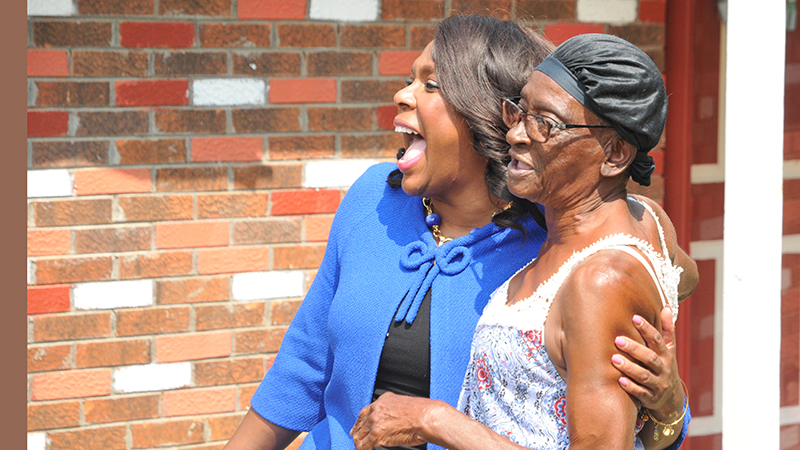 Rep. Terri Sewell, D-AL, talks with Willie May Spivey, a homeowner in Tyler. Spivey purchased her home in 1979 and was supposed to have a septic tank system. Alabama Public Health officials stated that Spivey’s home had a straight pipe septic system. . After a neighbor complaint, workers with the health department were able to contact the Alabama Onsite Wastewater Association, and was able to obtain a free system. The soil on Spivey’s property was characterized as “good soil” which helped her odds of obtaining one of the 11 free septic tanks given by the association each year statewide.

Members of the media, the Alabama Department of Public Health and others gathered at the Lowndes Interpretive Center on Monday with Rep. Terri Sewell, D-AL, to talk about one thing: wastewater infrastructure.

Sewell’s office organized the meeting to talk about the gaps in reliable onsite wastewater treatment services in rural Alabama, particularly in Lowndes County.

“According to the 2015 U.S. Census Bureau’s American Housing Survey, approximately 20 percent of all homes in the United States are served by decentralized wastewater treatment systems,” said Sewell. “These systems exist in communities where connecting to municipal utilities is either not an option or too expensive.

“In contrast to municipal water treatment plants and other centralized systems, decentralized systems include tanks and smaller cluster systems,” she said. “While it is unclear what percentage of decentralized or onsite systems are falling nationwide, system failures have been documented across the country, from California to Alabama. These failures often produce untreated sewage on the ground surface, which can back up into houses or flow into bodies of water. Animals and humans can be exposed to raw sewage as a result, which places public health at risk.

“The distribution, density and costs of decentralized or onsite septic systems varies widely by region and soil conditions,” said Sewell. “The negative consequences of these failures fall mostly on rural, minority and economically disadvantaged populations, as they are unable to resolve these challenges given their limited economic ability.

“Unfortunately, surveys of existing wastewater infrastructure suggest that many decentralized or onsite systems are improperly designed and more prone to failure than centralized sewers,” Sewell said.

“In many rural areas in America, low-income residents are left to their own devices in financing the full cost of installation and maintenance of their onsite septic systems. In places like Alabama’s Black Belt, where the soil conditions require more complex systems, these can cost more than $12,000 upfront, with maintenance costs required every few years.”

Straight pipe septic systems were common in places the group visited on Monday throughout Lowndes County.

“Straight pipe septic systems are individual sewage treatment systems that do not treat the raw sewage deposited in them,” Sewell said. “Untreated sewage is ultimately sent directly to rivers, lakes, yards, ditches and other areas where humans and animals have direct and indirect access. Properly functioning individual sewage treatment systems are septic systems that treat sewage with a chemical, physical and biological process, commonly using a septic tank and a soil treatment system.

Sewell added that the primary concern in the 7th District are straight pipe septic systems and failing septic tanks.

Failing septic tanks can be those that are installed by unlicensed people, some are homemade and other haven’t been adequately maintained.

“Lowndes County has received heightened national attention in the past several years for its concentration of straight pipe septic systems,” said Sewell.

“The county has a population of 10.358 and a median household income of $27,914, according to the Census Bureau. Other counties in the Black Belt with reported straight pipe system usage include Bibb, Butler, Choctaw, Hale, Perry and Wilcox Counties. We believe, however, that the prevalence of these systems is more widespread across the region and state.”

Sewell said she worked with other House representatives to secure an additional $1.8 billion in rural water and wastewater funding this 2018 fiscal year.

Legislation introduced included H.R. 5837, the Rural Septic Tank Access Act that would expand the Household Water Well System Grant program to include household decentralized wastewater systems and a $40 million increase in appropriation and H.R. 2328, the Low-income Sewer and Water Assistance Program Act of 2017, that would establish a pilot program that awards grants to at least 10 eligible entities for assisting low-income households maintain access to water and sewer services.

There are three needs to help fix this issue, according to Sewell.

One need is inventory in Alabama.

“There is currently not a countywide, statewide or nationwide inventory demonstrating the prevalence of straight line and failing septic systems,” said Sewell. “Several academic and environmental studies have been conducted over the years in various parts of Alabama but there remains a need for comprehensive statewide inventory in order to get assistance where it is needed.”

According to a 2006 study of more than 4,000 homes not connected to public sewer lines in Bibb County, 35 percent had failing septic systems and 15 percent had straight pipe systems. Another field survey in 2016 and 2017 found similar results in Wilcox and Hale Counties, where 50 percent of more of 400 rural homes surveyed had raw sewage on the ground surface.

“Current solutions include highly overdesigned and expensive systems, which have proven unsustainable in rural communities, specifically where soil conditions are poor for septic tanks,” Sewell.

“Engineering researchers have raised the option of using new membrane-based technologies as a more sustainable model in rural and remote areas.

“Investments need to be made so that our universities can develop technologies that are most efficient and sustainable in the Black Belt,” said Sewell.

The third need is sustained and streamlined federal wastewater funding.

“The USDA wastewater increases in the 2018 fiscal year Omnibus need to be sustained in future budgets,” said Sewell.

“Just as importantly, reform is needed to ensure that individuals in unincorporated communities, not served by municipal systems, have access to USDA and EPA funding resources for wastewater treatment.”