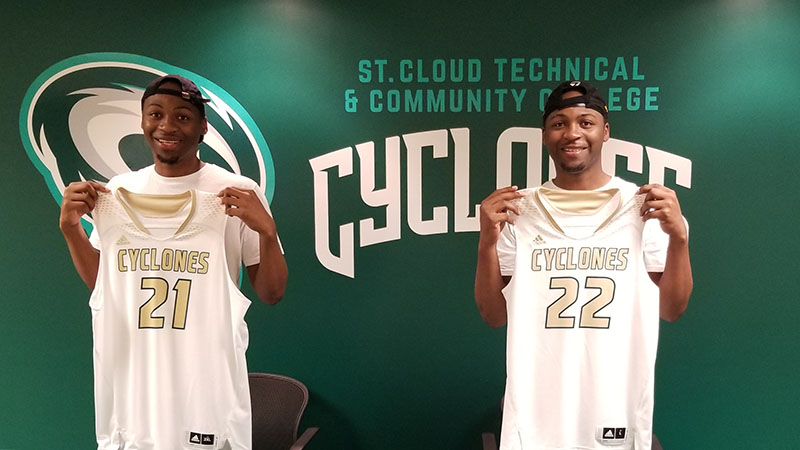 Dalvin Johnson (left) and his twin brother Devion Johnson (right) hold up their new Cyclones jersey’s after signing this past Thursday.

Second chances don’t come around every day, but twin brothers Dalven and Devion Johnson found their way back to basketball after signing to join the St. Cloud Technical and Community College Cyclones Thursday afternoon.

“It’s a great feeling to be back playing basketball again,” Dalven said. “I would like to thank God for giving us a second opportunity to play basketball again. It’s overwhelming, but a special moment for us.”

The Johnson brothers smiled as they raised their new white and gold Cyclones jerseys on campus in St. Cloud, Minnesota. The last time they were in uniform together, it was 2016 and they played for Tommy Tisdale at Keith High School in Orrville.

“I can honestly say it’s a blessing,” Devion said. “It’s an amazing opportunity. To be off as long as we’ve been off, and for God to give us this opportunity that we’ve been trying to get for a while. I was lost for words for a minute.”

After high school, they attended Wallace Community College Selma. They didn’t play for the WCCS Patriots, but spent their down time in the gym training and preparing. Unsure if another opportunity to play basketball at the next level would come, the brothers never gave up.

“We were just working out a lot,” Dalven said. “We were trying to get inside gyms, keeping our minds positive and keeping the faith as far as getting back to basketball.”

However, they would have to convince a coach that they could still play two years removed from their last high school game.

They sent old game tape and workout videos to coaches around the country hoping someone would give them a second chance.

“I was trying to get a coach that would take a chance on me and my brother,” Devion said.

Cyclones head coach Andrew Cone receives prospect e-mails from coaches, trainers and available players all the time, but the e-mail Devion sent him earlier this spring caught his attention.

“At our level, we get a lot of emails from coaches, recruiting services and players from all over the country,” Cone said. “Sometimes you get a little flooded with players that are looking for an opportunity, but Devion sent me a film of himself and I liked the way he played. Then he let me know he had a brother that was also looking to play and sent me his film.”

The Johnson brothers fit the types of players he was looking for. He was interested in seeing what they could offer his program.

“I’m very excited about adding them to our program,” Cone said. “Both of them bring different things to the table and we’re excited about that. We look for guys that can provide energy and skill on both ends of the court, and they both have that ability.”

Dalven and Devion were a little rusty to start, but after working out for Cone and practicing with the Cyclones players, they found themselves a new home.

“In person, they showed flashes of what they had in high school,” Cone said. “I think there is a little bit of rust there from sitting out, and that happens with players that sit out any period of time. I was excited about the way they looked, and more excited about how they can develop in the future here.”

Dalvin and Devion will be classified as freshman and have two-years of eligibility with the Cyclones. The Johnson brothers didn’t take the conventional route to reaching the next level, but they got there. Their patience, training and persistence paid off.

They found their second chance 1,240 miles from Keith High, but they will still wear the same numbers they wore for the blue and gold Bears.