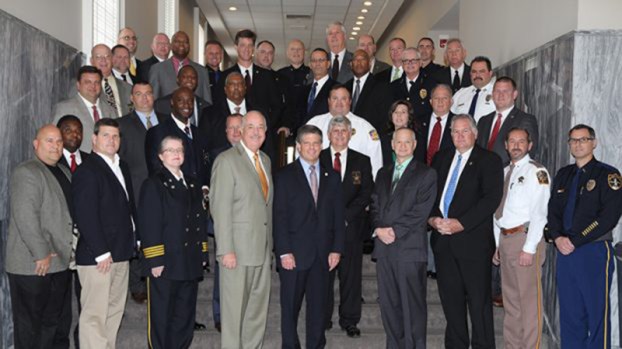 More than 40 law enforcement agencies make up the Alabama Drug Enforcement Task Force whose mission is to break up drug operations and fight against violent crime in Alabama.

The task force is made up of 75 law enforcement officers from 47 different agencies. The Alabama Department of Economic and Community Affairs (ADECA) and the Alabama Law Enforcement Agency created the unit last October. The goal is to share resources and intelligence to break up drug operations throughout the state and fight violent crime.

Dallas County District Attorney Michael Jackson is part of the group that’s in pursuit of Alabama’s most wanted. The task force will be in Dallas County for the next two months.

“What we’re trying to do is help the Selma Police Department,” Jackson said. “They have manpower issues.”

The task force hopes to clean up Selma’s gang issue.

“We’re declaring war on these gangs,” Jackson said. “These gang members are killing their enemies in plain sight. We’re going to get all of these gangs off the streets.”

Selma Police Chief Spencer Collier expressed his concerns over the gang violence at the Ward 7 hearing this week.

“We have a gang problem in Selma,” Collier said. “It’s not the typical gang. Every homicide we’ve had involved gangs.”

Public safety is a big concern for Jackson.

“People should have to walk around their neighborhoods without fear of being shot,” Jackson said. “Innocent people are getting killed because of gangs.”

During its short existence, task force members have seized illegal drugs, such as opioids, heroin, cocaine, marijuana and methamphetamines.  Collier said methamphetamines and cocaine are the biggest drug issues in Selma.

Having Jackson as a member of the task force puts Dallas County in position to end the numerous shootings.

“One good thing about having my office involved is to identify the problems we’re having in Dallas County and some of my other counties in my circuit,” Jackson said.

By: Oniska Blevins Sgt. Jeffery Hardy has a true servant’s heart. The father of two and devoted husband of more... read more