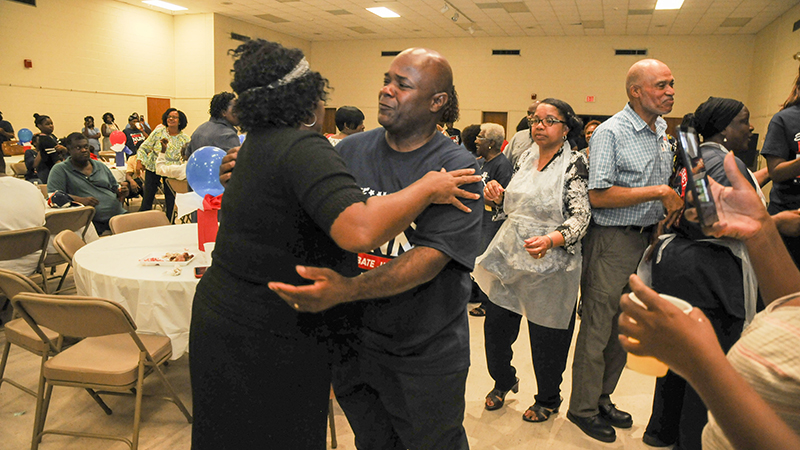 Nunn easily defeated Nicholas Switzer 6,305 to 4,636 to become the County’s new Probate Judge in the run-off Election on Tuesday night.  Nunn won with 57.63 percent of the vote, compared to Switzer at 42.37 percent.

As tears streamed down his joyous face, Nunn hugged his wife, Phenicia, and their three children, Jimmy Jr., Jimicia and Jimiya during a celebration party at the Selma Convention Center. His mother, Bettye Nunn, was also on stage in the celebration.

“I thank God for me winning this race,” Nunn said. “I couldn’t have done it without my family and supporters in Dallas County. They supported me and came out to vote for me.”

Nunn continues to move up the political ladder in Dallas County. He’s served as City Attorney for three different Mayor administrations in the city of Selma and was also Dallas County’s Assistant District Attorney.

“It feels great,” Nunn said. “It’s an opportunity to write another chapter in history.”

Phenicia Nunn thanked the Dallas County residents in both the primary and runoff elections.

“I’m overjoyed that the people in Dallas County showed support for my husband,” Phenicia Nunn said. “We appreciate it.”

“Judge Ballard and I are very close and we’ve worked together in the city for years,” Nunn said. “We have a very good working relationship.”

“I want to congratulate Switzer for running a good campaign,” Nunn said. “He did a good job as did the other candidates. They all ran clean races. There was no bashing.”

Switzer, a senior Microbiologist at Alabama Department of Public Health, was equally classy.

“I contacted Jimmy to congratulate him, but couldn’t get a hold of him. I sent him a congratulatory text,” Switzer said. “I just want to say a big thanks to the people of Dallas County that came out to support me. We ran an absolutely incredible grassroots campaign. We gave it everything we had 110 percent, and it was just not enough.

“The people spoke, and that’s what they wanted and I have no problems with that,” Switzer said. “We left everything out on the line. We put our hearts and souls into it, and at the end of the day if you lose you lose and we are looking forward to the next one.”

Switzer was disappointed in Monday’s arrest of Rose Sanders for stealing campaign signs on private property 24 hours before the election.

“I will say this if you take away all the shenanigans that happened in the last 24 hours and the last eight months and you get down to the actual politics with people, I have never had a better experience in my life,” Switzer said. “Talking to people about their issues and what they want and what they feel is the solutions are is a powerful experience.

“I recommend that to anybody. I feel like we have gotten to a generation where we don’t know our neighbors anymore,” he said. “I would encourage anyone to get out and meet each other. It is not as bad as people are telling you it is. There is a tremendous number of awesome people in Dallas County. There is a tremendous amount of potential in Dallas County, and one day we are going to realize that, and I’m looking forward to that day.”

The Probate Judge race was the only local contest in Dallas County. In the June 5 primary election, Nunn finished first with 3,983 votes, while Switzer received 3,753 votes to force a Runoff.

Switzer is unsure of his future plans.