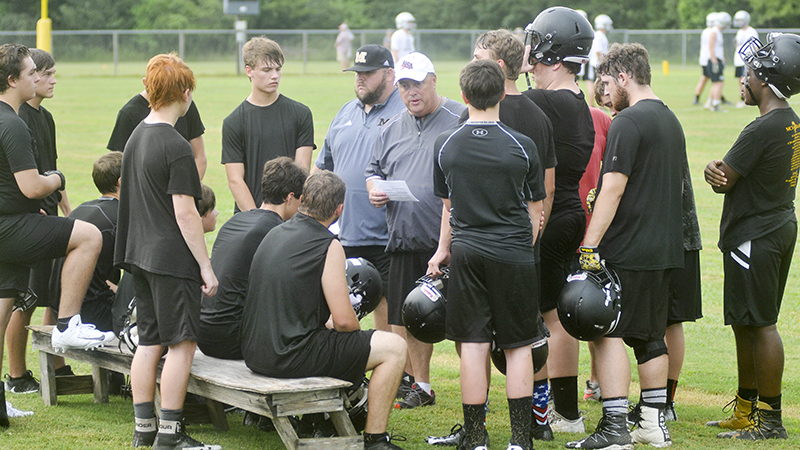 Meadowview Christian coaches Bob Taylor and David Shaw talk to their players on the sidelines.

The Meadowview Christian Trojans football program was back on Wasden Field Thursday afternoon as it hosted eight other Alabama Independent School Association (AISA) football programs for an evening of seven-on-seven competitions.

The field was split into two halves and teams faced off in 20-minute games with a running clock. Playing in just helmets, the teams played no-tackle football with just receivers, running backs and quarterbacks on offense and linebackers and defensive backs lined up against them. 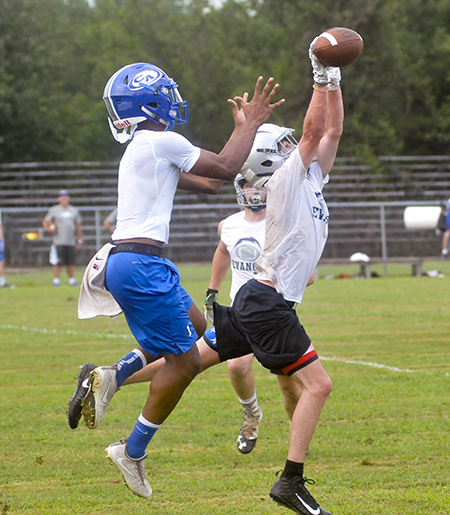 “The majority of the guys that are here are all guys that I’m pretty good friends with, and they said they’d be glad to do whatever to help build the program and they all agreed to come in,” Taylor said. “We’ve got eight other schools here other than ourselves (MCS) out here playing seven-on-seven. There’s some pretty good teams out here throwing the ball around, and it’s a chance for our kids to learn how to play 11-man and seven-on-seven against three really good teams that we’ll play today. It’s just going to be a learning process for us to build our program with.”

This past season, Meadowview played eight-man football. Since Taylor has stepped in as the school’s new headmaster, Meadowview has rejoined the AISA and returned to traditional 11-man football for the 2018 season.

As the summer winds down and the season approaches, the Trojans are making the adjustments to get ready for the season. 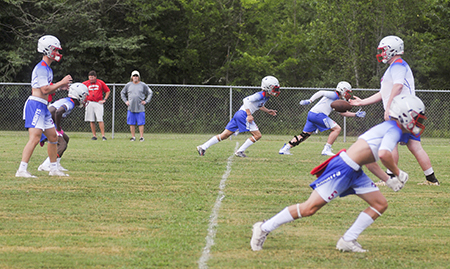 The Macon East Academy takes off at the snap during the seven-on-seven tournament.

“We were a little wide-eyed with it being the first time this has happened,” Taylor said. “Some of the kids noticed there were a lot of people here, and they’re not used to seeing that here. This type of competition here on a Thursday afternoon is great for us, and our kids are learning to compete and knowing they can compete with teams week in and week out.”

Zach Duke took the snaps at quarterback for Meadowview Christian during the seven-on-sevens. He is stepping up in place of Jeremy Lee, who will be playing for Morgan Academy this fall.

“[Duke] is doing a good job. He’s trying to pick up a whole offense in a short amount of time,” Taylor said. “We’re trying to be real small. We’re very limited with what we’re doing right now. It’s just trying to get him to learn his reads, where to go with the football, proper throwing mechanics and all that. That’s just Football 101 that we’ve got to get to.”

The Trojans coaching staff is also making the adjustments on the go as well. While Taylor kept the seven-on-seven games moving, Trojans coach David Shaw was leading the huddle and calling the plays.

“[Shaw] has done a good job and coach Cale Thompson, he’ll be coaching the defense for us,” Taylor said. “It’s going to take some time, but both of those guys are big hires for us to help try to build here.”