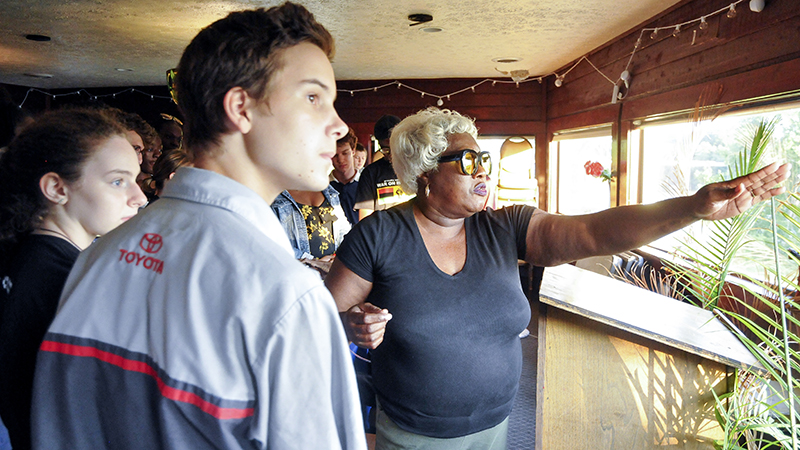 Betty Boynton was 15-years old when she and the other Civil Rights activists marched across the Edmund Pettus Bridge on Bloody Sunday.

Tuesday afternoon at the Selma Center for Nonviolence, Truth and Reconciliation (SCNTR), she spoke about her experience fighting off tear gas, seeing the policemen on their horses and the terrors of that fateful day to a special group of high school students visiting Selma as a part of their three-week journey through the South to learn more about the Civil Rights Movement.

The rising seniors are a part of Operation Understanding D.C. (OUDC), an educational non-profit organization created to strengthen the relationship between Blacks and Jews through high school students to help them become leaders in their communities.

“We put together a journey that loosely follows the 1961 Freedom Rides, and we get a chance to meet with Civil Rights foot soldiers in each of the city’s that we go to,” OUDC program director Ricki Horne said. “We meet with current movement leaders and physically walk the path of history all through the Black and Jewish lens in the South. We get amazing opportunities such as the one today to meet with attorney Boynton, whose Supreme Court case sparked the 1961 Freedom Rides and whose legacy we try to carry on in the work that we’re doing.” 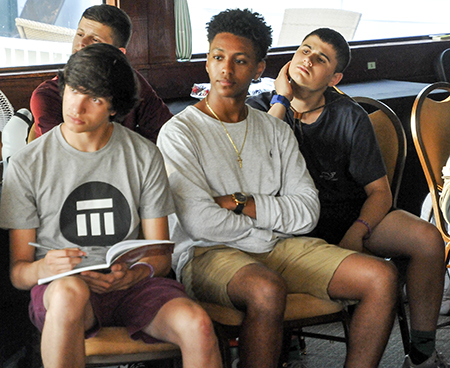 The students took notes and absorbed every detail that Boynton and her husband, retired attorney Bruce Boynton, told them about their experience fighting for civil rights in America.

The view of the infamous bridge crossing over the Alabama River was a perfect background for the speakers as the students looked upon the scene of the injustice.

After the Boyntons finished sharing their stories of fighting for civil rights, they engaged with the students who came up to speak with them and ask more questions about their experiences.

“They were so engaged and they were taking notes,” Jackson said. “Almost the whole group was up there wanting to know more, and so I have great hopes for what these young people will do to help transform our country because they are so eager to learn and to grow.”

The OUDC students made the most of their trip to Selma. A stop on their journey that has cultural significance for everyone in the program.

Earlier in the day the group toured the Mishkan Israel temple on Broad Street and learned about the history of Selma’s Jewish culture. They were told about the issues and challenges that the Jewish community has been through and currently faces as a surviving culture.

“It’s hard to describe the personal growth that I’ve felt by being able to talk to my peers and walk with them through amazing experiences that are very intense, scary and emotional,” Kate Sosland, a Jewish OUDC student, said. “I think it’s really crucial to keep the lens of the African-American community as well as the Jewish community. It was very inspiring to be able to first go to the temple and meet the community members there who are trying to maintain what they have left, which was a very heartbreaking experience. As a Jew, to know that there’s only five people left in the congregation was very hard to grapple with.”

The exploration of Black history and Jewish history is fitting for the OUDC because the group is a combination of young Black and Jewish students who joined the program to learn about racial and social justice. 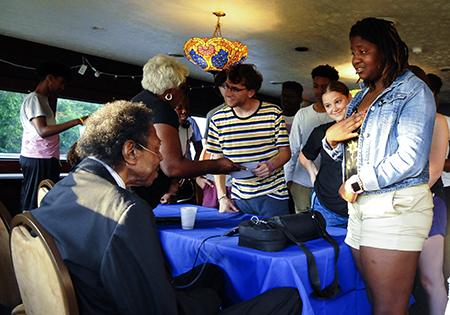 Garrett O’Brien, Addie Alexander, Monique Vaz and the other OUDC students had the opportunity to meet and speak with the Boynton’s during their trip to Selma.

“We work with the students year-round to help them learn about racial justice, social justice and particularly how the Black and Jewish communities have historically worked together in the fight for social justice and civil rights,” OUDC program facilitator Ray Uyeda said. “We are really trying to get a well-rounded look at how communities have struggled together, supported each other and we’re focusing a lot on who the unsung heroes of history were. A lot of the people that we don’t hear about were the people who were supporting the movements in ways that were integral to their success.”

Halfway through their journey, the students are filling up their notebooks with information from each stop. In 10 days, they’ve already been through North Carolina, South Carolina, Georgia and now Alabama.

They visited the Equal Justice Initiative’s (EJI) National Memorial for Peace and Justice and Legacy Museum in Montgomery before they traveled to Selma.

Sosland was able to see how much of an impact the memorial had on her African-American peers.

“I was walking around with my close friend Fatima, who is a Black peer of mine, and she was very emotional watching this,” Sosland said. “I realized at that moment I could not possibly understand the fear in her eyes and the sadness. Even though I did share that and was empathetic for it, as a white person I could not possibly understand the terror that her ancestors and Black people today have to deal with.”

The trip to Selma revealed moments in history that the students hadn’t been introduced to before. The details from unsung heroes and footnotes from history caught the attention of Natinael Tilahun, a Black OUDC student.

The students left for Meridian, Mississippi to begin the second half of their summer learning experience. They’ll stop at a few more historical southern cities, such as New Orleans, Louisiana before returning home to D.C. with more than enough information and motivation to pour back into their communities.

“When we get back to D.C., I train them to be facilitators and lead workshops in the community on diversity and inclusion,” Horne said. “The goal of our program is to create a generation of leaders who work to eradicate racism, anti-Semitism and all forms of discrimination. We want to see them acting and taking what they’ve learned into their communities and creating that change that we’ve talked about.”