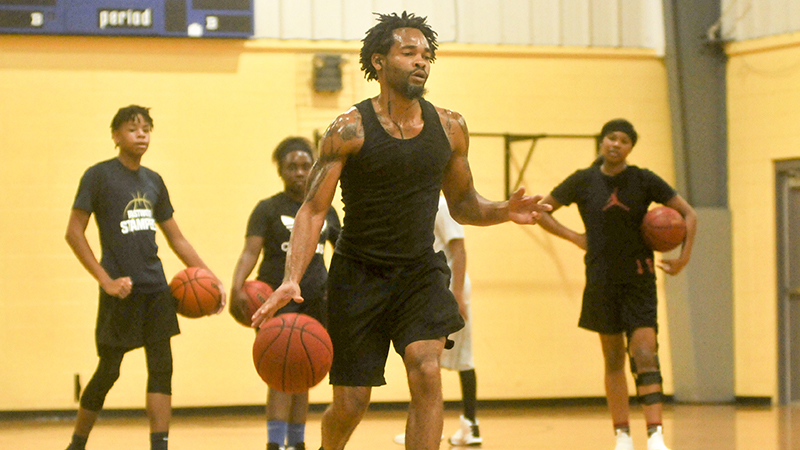 During early mornings at the YMCA of Selma-Dallas County, the chirps of sneakers on the basketball floor can be heard from the check-in desk.

Some mornings it sounds like a stampede of children, and sometimes it’s the staccato of a single player making cuts in between the rhythm of the dribble.

Crowded or empty, local basketball trainer Jeremiah Whitt, 32, tends to be the source of the beats coming from the YMCA’s gym.

The former Keith High basketball player goes into the closet in the gym to retrieve his net filled with cones and two basketballs to setup his half-court training course.

One by one, he sets the cones into various formations that outline different paths to the goal.

A hesitation move at the first cone sets up the crossover at the next. The stutter step leads to the side-dribble at the final cone for a pull-up jumper.

No matter which way he sets up the cones or which moves go into each drill, Whitt leads each drill himself.

Some trainers like giving a demonstration and observing and others may just give a player instructions, but Whitt prefers to go through his training sessions with his clients.

By the end of each session, Whitt and his players are covered in sweat.

A self-proclaimed gym-rat, he prefers to lead by example.

Through several repetitions of the same exercise, his players watch and mimic each move until they have it down.

“It’s easy for a coach to say ‘do this. Do this. Do this,’ as opposed to a guy who will get out here and say ‘Do this. This is how it’s done, and this is how it needs to be done every time.’” Whitt said. “I’m going to sweat with you every rep, so if I can push myself then you can push yourself.”

If Whitt messes up a drill, he goes back to the start of the drill to do it again. His players follow suit. When they lose their dribble or go the wrong way, they follow their trainer’s lead and start over.

He holds his athletes accountable for finishing each drill because he has been in their shoes before.

“It’s a give and take,” he said. “I’d rather show you than tell you. Sometimes they don’t necessarily understand how people explain things to them, so I can get out there and show it to them and break it down into smaller steps so they can have an understanding.”

After playing varsity basketball for the Keith Bears for four years, Whitt took his game to the next level playing at Marion Military Institute (MMI), Wallace Community College Selma and Auburn University Montgomery.

“I was blessed to be gifted enough to start four years on varsity at Keith and receive scholarships after high school to continue playing at the college level,” he said. “Now, I’m trying to spread the knowledge that I have obtained over all these years to teach the next generation how to be the best ball player they can be.”

Whitt fit the prototype of a Keith guard to a tee. He wasn’t the biggest player, but his effort gave him an edge on the court.

“Country tough is a real thing, so playing at Keith prepared me for the college level,” he said. “Once I got to college, they showed me what repetition was. Fine tuning your game and putting in time in my craft. When you don’t have anything to do, be in the gym. That’s how you become the best ballplayer you can be … I took that initiative we learned in the country from playing hard with the grit and grind, and I added that to the work ethic that was taught to me in college.”

Once he reached the college level, he learned what it took to improve his game and that’s what he shares with the players he trains today.

He had a brief stint coaching with the TNA Heat Basketball Club, his own AAU team Disciples of the Game, with R.B. Hudson Middle School and as an assistant at WCCS.

He enjoyed coaching, but he found his passion for training. The one-on-one instructional time to help develop a young athlete is what he gets excited about. The grind of skill development and seeing the improvements pay-off is what keeps him coming to the gym.

Whitt works with anyone who wants to put in the work to improve their game.

He’s worked with young kids at the YMCA’s summer camp and some of the top local high school players and college players.

He even helps lead workouts at the WCCS gym, and his clients’ locations range from Tuscaloosa to Prattville and Mobile.

“I’m not tied to any team, but I believe in competitiveness,” Whitt said. “It’s about whomever wants to get the work in. I’m willing to help.”

“Jeremiah is a very good and thorough trainer,” Turner said. “He pushes all the athletes and is very encouraging. Not only does he work them hard, but he demonstrates well and participates with them. He is also on the kid’s level, where he knows how to get in their minds and see what they’re thinking. I know that they’re getting the best instruction they can get. He’s going to train them the right way, and he’s a former Patriot himself.”

WCCS incoming freshman and former Dallas County High center LaDarius Furlow works out with Whitt. Selma High Lady Saints forward Aaliyah Hatcher has been working out with Whitt since she was in middle school.

“[Whitt] makes things easier,” Hatcher said. “When I can’t do something, he explains it to me and motivates me to be better. It’s good to have somebody that wants to see you get better and help you. I think it’s a good opportunity to work out with him.”

Whitt has also worked with players like William Lee, who had a record-setting career at UAB and is now playing for the Grizzlies in the NBA Summer League. Harriet Winchester, a Keith product who plays for Troy University women’s basketball, also trained with Whitt.

However long his list of successful clients gets, Whitt continues to work with any basketball player committed to getting better.

But the $15 per hour session won’t be a cakewalk. He doesn’t divide up the girls and boys into different groups. Every player gets pushed as hard as the other, and Whitt will be right alongside them.