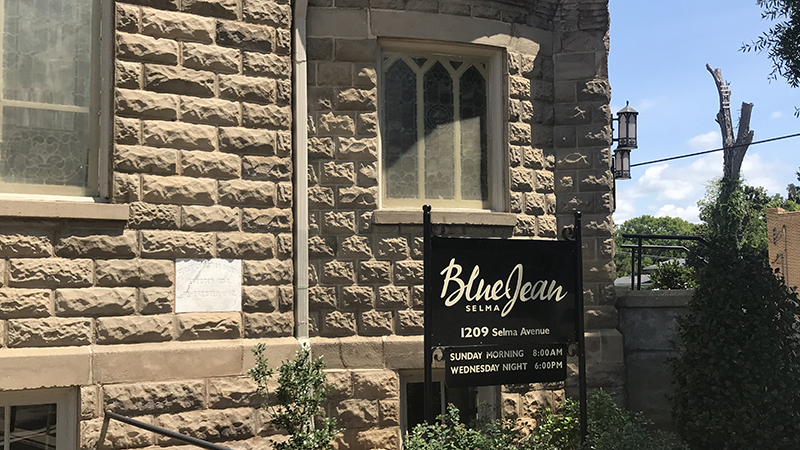 Bob Armstrong and other original members of the Blue Jean Church have seen changes in their congregation happen over the past 10 years.

With no plans of ever becoming a church, Armstrong said it has come a long way from the beginnings at First Presbyterian Church.

“The idea was to reach out to people that weren’t going to church for whatever reason,” he said. “One of the primary reasons was they maybe didn’t feel comfortable or didn’t have the right clothes or look or wasn’t living right. So, we tried to tailor and brand a service that would be really easy for people who would not feel comfortable in a traditional service to come and be at ease.”

Armstrong said that each church does a great job at their services, but Blue Jean’s vision is simply different.

“We are just in a different lane,” said Armstrong. “Our lane is to remove any impediments from people coming and we just started inviting people when we would run into them, and it worked.

“We want people to come as they are,” said Armstrong. “It took off. After about five years at First Presbyterian, we had outgrown where we were, and we blessed them and they blessed us, and we moved outside the walls of that church.

“We became a non-denominational family of believers,” said Armstrong. “We didn’t start out to become a church. It was not our intention. We just wanted to reach out to those that were not going to church.”

Soon after moving out of First Presbyterian, the group started attracting a mixture of people ranging from families to single individuals.

“There is quite a mixture here,” Armstrong said. “We have always been very missions oriented. Our vision statement is to see the people, the community and the world to transform through the power and love of Jesus.

“We are very intentional about helping and changing our community,” he said. “We want to be outwardly focused.”

The church now has expanded to offering a Pre-K service, a senior center and Fatherhood Initiative also is housed at this church.

The church also has a rotation of speakers that range from Armstrong to Selma City Mayor Darrio Melton.

“I don’t see myself as a pastor,” said Armstrong. “I just see myself as somebody who loves God and wants to love God. I’m not perfect, but I want to follow Him and I want others to experience His love because it changes you. I’ve experienced it, and you will never be the same when it happens.”

Armstrong said the church now has a leadership team of 12.

“Structurally it is becoming similar to other churches,” said Armstrong. “It has just really happened in the last few years where we have learned how to really be a church.”

Armstrong is a Selma native and has seen many changes happen over the years.

“I’ve seen some pivotal things that have happened throughout the years that have really contributed to some of the difficulties we see now,” he said. “However, I am so hopeful about our community and extremely positive about Selma.

“We recognize the problems, and not dwell on them, but instead dwell on the solutions to them,” he said. “This will get turned around. I believe we and others are turning this around.”

Also serving as District Judge for Dallas County, Armstrong said that he has seen changes in the juvenile system.

“As a judge, I have seen a drop of 80 percent in juvenile crime,” he said. “We have incarcerated 95 percent fewer kids than when I got going almost 14 years ago.