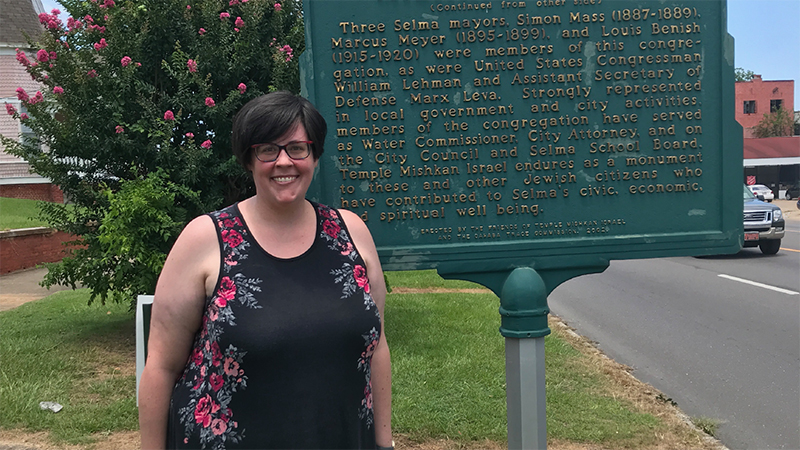 Dr. Amy Milligan, a Batten Endowed Assistant Professor of Jewish Studies and Interfaith Understanding and Women’s Studies at Old Dominion University in Norfolk, Virginia visited Selma this week as part of her research into the Jewish community in the town.

“One of my research areas is small town Jews or small community Jews,” said Milligan. “I am really interested in congregations that have a small membership, and in how they navigate both their lives in the synagogue, and in the larger community.”

Milligan said she had a mutual friend that introduced her to people in Selma that helped her start her project here.

“I met with Ronnie Leet and others about a year and a half ago, and tried to figure out ways I might be able to the community here and ways to collect and preserve their stories,” she said. “It seemed like a pretty natural marriage of interest.”

Milligan said she had 56 people to interview.

“They are obviously not all in Selma anymore,” she said. “I’ve interviewed the ones still here, but I have also talked to people that grew up in Selma, people that have memories of coming to visit grandparents and people that have brought their own children back to experience the Jewish community in Selma that they grew up in.”

Milligan said that the Jewish community has had a significant impact in the Selma community.

“There is the big temple here still, but I think there has been a number of things the community has contributed to Selma,” she said. “Selma has had three Jewish mayors historically. Most of the downtown businesses were Jewish, particularly the department stores that were along Broad Street. I think the Jewish community has been here for a really long time, and have been really established in the community as business people that are involved  in Selma’s life.”

Milligan said she has worked with other communities in North Carolina and Pennsylvania.

“What I’m interested in here is the history,” she said. “There are people who have done amazing historical work already on the Jewish community in Selma, but I am mainly looking at what it is like in 2018 to be Jewish in Selma.

“What is really unique about the community is this huge network of people around it who still feel strongly about their Selma roots,” she said. “They care about the temple here and the community in ways that I don’t see in other communities.”

Milligan said she is active in the Jewish community in Norfolk.

“Part of my job and life passion is to build bridges from campus community to larger community and bring people into conversations with each other,” said Milligan. “Just across religious divides, social economic divides and race so that we can learn that we have way more in common with each other than what we think. One of my greatest joys at work is being able to take my students into the community and interact with other people. We see those intergenerational conversations happen. It is also a recognition that a lot of learning happens outside of work as well.”

Milligan said she drove from Norfolk to Selma, which is around 14 and a half hours of driving.

“It was totally worth it,” she said. “Everyone has been so welcoming. I can’t wait to be back.”