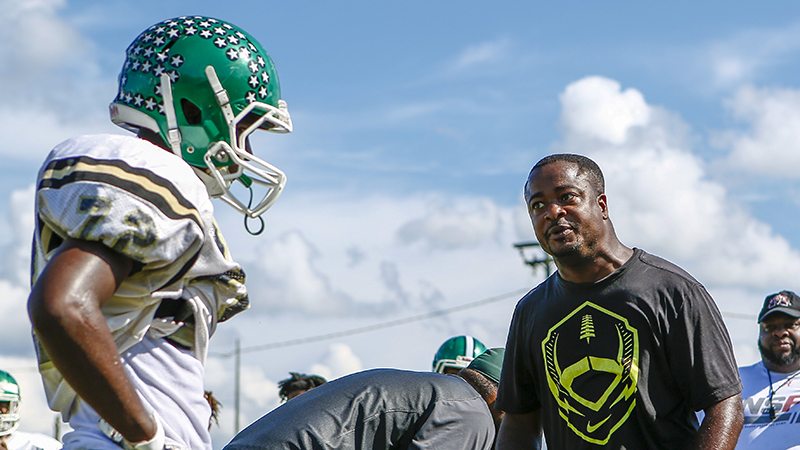 The Dallas County Hornets football program will be in search of a new coach this summer since former head coach Cliff Matthews’ contract wasn’t renewed for the 2018 season.

Matthews had led his team through spring practice, but at the end of the school year, he was no longer the head of the football program.

“It’s always great working with a great bunch of kids,” Matthews said. “I didn’t get to spend a whole lot of time with them before the season, but I got to make a bond with them during the offseason. It was definitely a learning experience.”

He was hired by Dallas County late last summer with just a few weeks to prepare for the 2017 season. The team got off to a rough 0-3 start, but Matthews earned his first career win in a 32-18 victory over Sumter Central.

The Hornets won two more games at the end of the season to bring the final record to 3-7 (2-4 region). The team averaged 14.5 points per game and allowed 36.7 per game. The team won two home games in Plantersville.

Matthews had a first-team all-county running back in Calvin Starks, who was the Hornets go to player this past season. Starks finished the season with 1,854 all-purpose yards, 14 rushing touchdowns, two receiving touchdowns a passing, punt return and kick return touchdown.

An eligibility violation by Central-Tuscaloosa put Dallas County in a three-way tie breaker for a playoff spot, but the final playoff spot went to Jemison.

Matthews didn’t get much time with the Hornets program, but he consistently talked about changing the culture. His proudest moment from the season wasn’t a turnover or a touchdown play, but helping one of his players focus on raising his ACT score.

“My favorite moment from the season was helping Kenchavious James pull up his ACT score from an 11 to a 19,” he said. “The message from the season was it’s not all about football. My position was to make them better young men. He helped himself pull [his score] up, but just to see me put a little fire behind him and he go at it was great.”

This upcoming season, Dallas County will move down from Class 5A to Class 4A Region 3. They will be joined by American Christian Academy, Greeensboro Public High School, Montevallo, Sipsey Valley, Sumter Central and West Blocton High School.

While the team waits for a new coach, there is talent waiting to be tapped into out in Plantersville.

“They have an exceptional eighth-grade class that’s going to be coming in. They’re going to be one of the great classes to look out for,” Matthews said. “You’re going to have a little bit of leadership from last year. Of course, you have Octavious Palmer, Savaughn Brown, who can be a diamond in the rough athlete, and you’ve got some running backs.”

Matthews is currently working on his administrative degree at Jacksonville State, and remains interested in returning to coaching in the future.